More blooms, and more on class

I am back from Southern CA once again and will have some photos to share of subtropical and tropical fruit, but wanted to be sure to include a couple more Bay Area spring bloom shots and mention David Goldberg's photography class one more time.

This tree is an ornamental plum. The double blossoms are so voluptuous against the otherwise bare limbs of the tree. 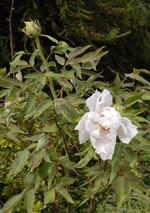 And this one is a tree peony. I wrote about these in my SF Chronicle column (at SFGate.com) a couple of weeks ago, but didn't have a photo then. This one is blooming in the Asian plant section of the SF Botanical Garden in Golden Gate Park. These plants, which are really shrubs that grow to about 4 feet tall, have the same lovely flowers as the herbaceous peony of colder climates, but can thrive in S.F. and other places that have very mild winters. This one is a single blossom, but there are also double-flowered varieties. There are even yellow and orange tree peonies.

I notice that a number of viewers of this blog have been linking from my blog to the blog about the Garden Photography Class that starts next Saturday. One last plug before it begins. It isn't taught often, so if you think you will want to know how to take better plant or garden photos, this is the moment to jump.

Maybe you still love to shoot film, or maybe you have purchased a good digital camera, or are thinking about going digital. Maybe you have been shooting a bit and wondering how to get better at it. This class will get you into the nitty-gritty of using your camera better and with more confidence, and will get you into gardens that will inspire you to want to shoot more photos. Check it out at www.gardenphotographyclass.typepad,com. There are links there to see photographs by the instructor or to enroll through UC Extension.

I've been looking at many blooming trees this past week, following my own advice of a couple of weeks ago. They bloom so briefly and are so lovely. Here are a few. This is, I believe, Magnolia x soulangiana.

At the San Francisco Botanical Garden, formerly Strybing Arboretum, I wandered among many beautiful trees. There was a cherry Prunus x yoedenensis, the one that blooms in Washington, D.C. (below, left) 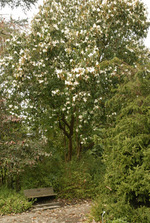 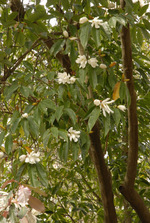 Then, a little farther on, there is a magnificent Michelia doltsopa I know, "Say what?" I don't know that it has a common name, but it is lovely. It's a relative of magnolia that is native to China and the Himalayas. The huge white blossoms of Michelia doltsopa are fragrant. 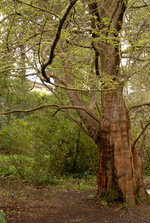 Finally, I couldn't resist including a dawn redwood just leafing out. One of my favorite trees and this is the very best time to see it. It's a relative of our California redwoods and sequoias that was discovered growing in China in the 20th century, long after it was thought to be extinct. The man who found it growing visited San Francisco a few years ago and saw our trees. Unlike our redwoods and sequoias, it is deciduous. So in spring you get the tiny, delicate leaves budding out, so tender and pale. And of course the trunk is wonderful, looking like it was macramed. There is a grove of these trees, they seem to create their own color of light at this time of year. If you live nearby, visit the garden in the next week and you will see what I mean.

The Gardens on Alcatraz

Because I have been doing some consulting for the Historic Gardens Project on Alcatraz Island, I have been to the island several times recently. I first heard that there were remnants of gardens on Alcatraz several years ago when I was working on my book Wildly Successful Plants. I learned that many of the plants I was writing about had survived from historic gardens that were planted there. Starting with a military base in the mid to late 1800s and continuing throughout the period when the island was the site of the famous federal prison, inhabitants have been gardening. What survived includes succulents, pelargoniums (geraniums), fuchsias, roses, and many more kinds of plants. These days, there is a full-time gardener on the island and teams of volunteers who work on Wednesdays and Saturdays. The gardens are starting to revive.

I took this photo last week in the Officer's Row gardens. In the 1880s there were houses here, with gardens between. After these houses were demolished, in 1941, the places where they once stood became cutting gardens. Here volunteers are tending the renovated gardens while staff is observing their progress.

Even the less tended areas of the island have a wild beauty. There were concrete residences on the south end of the garden, where employees of the prison lived. These were demolished, and succulents like these Aeoniums have begun to cover them, as if they were nothing but a different sort of rocky cliff. This part of the island is off limits in summer and fall, so that the island's many birds can nest undisturbed. In winter, you can wander over more of the area.

Ahd this stone wall is covered with various wild and domestic plants. In summer it is abloom with Centranthus (Jupiter's beard).

And, of course, the views are spectacular. Worth escaping from the big, dark cell block teeming with tourists and heading for the paths. The blackened skeletons of flower stalks of Agave americana spring up picturesquely here and there in front of ruins and the marvelous views of the surrounding bay.

Here is one of the birds of Alcatraz. There are many kinds on the island, including perhaps a few more gulls than most visiting humans would prefer. But these gulls don't seem accustomed to begging for human food, probably because you can only eat in the area near the docks, so they don't get much encouragement. Looking down over the cliffs on the south and west sides of the land, you may see herons, cormorants, and other water birds.

I'll be going out to Alcatraz once a month, and will report on their progress. But already, it is definitely worth a trip to see what is going on in the gardened areas. Or consider becoming a garden volunteer. You can learn more about it at www.parksconservancy.org/calendar/index.asp?event=194 by calling (415) 561-3062 or emailing cashford@gardenconservancy.org.

A few words about David Goldberg's upcoming class on Garden Photography, which is being offered through UC Berkeley Extension. It starts on Saturday, March 29th. It will be held at the Extension's downtown SF campus, with validated parking next door. It includes 3 field trips to Bay Area gardens, where you can practice the skills you are learning in the classroom. And, most importantly, David is an excellent teacher, who will put energy into helping you improve your photography.

The photos in this entry are David's. You can many more of his shots on his web site: www.davidgoldbergphotography.com. You can learn many more details about the class on his typepad blog page: www.gardenphotographyclass.typepad.com. Whether you want to improve your plant and garden shots for personal reasons, or need better shots in order to market your work as a garden professional, this is the class that can get you from here to there. It isn't offered very often, so I encourage you to get it while it is available.