Want to grow something that isn't the same thing you always grow? If you live in a location with a relatively mild winter, here is an idea. The plant species is Polymnia sonchifolia, common names yacon or Bolivian sunroot. It is a plant featured in the book Lost Crops of the Incas--and in my book Golden Gate Gardening (see cover in column at right). It is relatively uncommon outside of the Andes, but not lost, by any means. I've been growing this plant since the late 80s. The photo at left shows a crown with the rhizomes at the center top, and the tuberous roots hanging off of them. You plant the rhizomes, then in winter or early spring, dig them up, cut off and eat the tuberous roots that have formed under them, then replant the rhizomes. 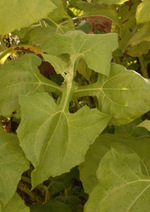 In summer the plants grow. They have really big, furry leaves, arranged in pairs. The leaf stems (petioles) are winged--that is the leaf blade continues right down the sides of the leaf stems. And the plants are very tall. What I have read about them says they can reach 6 feet, but mine are usually rather taller than that, maybe 8 feet, maybe more. 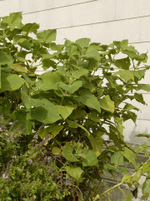 These aren't quite full grown. In about late October or in November, they are topped with rather small orange daisies. Seems like a lot of plant for those tiny flowers, but of course the real reproduction is going on underground, where the rhizomes are multiplying.

So what does it taste like? The edible tuberous roots are crisp, juicy, and mildly to very sweet. Sort of like jicama, but juicier. I like to eat them raw myself, though there are those who advocate cooking them. Might try it.

To eat them raw, I just take a potato peeler to them, then wash and slice them. They are good just as is (shown on the plate with some also delicious homegrown sugar snap peas) or in a salad in place of jicama. One I like has red onion rings marinated in orange juice vinaigrette, sliced orange, Bolivian sunroot, avocado, dressed with the vinaigrette, served on a bed of lettuce leaves.

You can get starts of this crop through www.nicholsgardennursery.com and also through www.seedsofchange.com.

Due to a snafu with the distributor, my book Golden Gate Gardening (see cover in right column of this blog) has been unavailable for a little while. But now, my publisher says it is back in stock. Bookstores and other retail outlets can order it from the distributor PGW. Individuals who can't find it readily in a store can order it directly from Sasquatch Books, either online at www.sasquatchbooks.com or by calling them at 1(800) 775-0817. (Or tell your bookstore or nursery where to order it.) If you are gardening to grow vegetables, fruits, herbs, or cutting flowers in the Bay Area, this book will definitely help you get more out of your garden all year.

More on the Chard Leafminer

After a series of posts on really pretty plants, I thought it was time to show something no less important but not as charming. I have written several times about Swiss chard leafminers and their management. These pests are starting to emerge from pupae and lay eggs on the undersides of my chard leaves now. The little brown pupae have been in the soil all winter, either in your garden or one nearby. The adult insects, which are small flies, have emerged from the pupae, flown away, found flies of the same species, but the opposite sex, and mated.

There are the eggs that the females lay on leaves. They are quite tiny and white, elongated, arranged in parallel rows.

And here are the larvae, which, because the insect is a fly, are correctly called maggots. When I opened the leaf, they tried to crawl back betweeh the opened layers.

Yeah, I know, they're kind of disgusting, but now you know. These are not, by the way, the maggots that live in garbage. This insect only lays eggs on Swiss chard, beets, and spinach. They are active between late March and about mid October here in San Francisco.

If you see their damage on your plants, your first defense is to brush off the eggs, or pick off any leaves on which you see the blotches that show they are feeding inside. If you are vigilant, you can prevent them from maturing to pupae and dropping to the soil. If they get ahead of you, they will repeat their life cycle several times a summer. Summer oil sprays (choose one based on an edible oil, such as canola or soy) or a bacterial extract spray that is sold under the brand names Bull's Eye or Spinosad, used according to the directions on the label, can help. However, in my college garden, the critters got ahead of us over the past few years, so my strategy this year is to remove all susceptible crops from the garden during the summer. I will replant chard only in late August or September, and protect it with a row cover (a white polyester sold for this use in gardens) until cool weather has killed any adult flies. I plan to start the plants inside about six weeks before I plant them out, to give them a little bit of a boost, and hope for a good harvest until the following March, when out they will come.

Curious to see the blotches on chard leaves? Use the legit search feature on the right side panel of this blog to search for "chard" and you can see other posts on this subject.

Early this year I started 4 chayote squash plants in the greenhouse at City College. Three of them grew, and I photographed them. (The photos appear in my blog on February 25th.) The construction class built us a beautiful trellis, and then, several weeks ago, covered two sides with nylon bean trellis mesh for the chayote to climb on. Then I put the chayotes in larger pots and moved them to the lath house, a structure built only with wooden slats, set several inches apart. Since chayote begins to resprout each year from its perennial roots in March, I thought it was time for the plants to begin to get used to life outside of a greenhouse.

I went off to deal with Dad's house for a week, and when I returned, I saw that cold nights and strong winds had burned some of the chayotes' leaves. The trellis is ready, the soil prepared, but alas, the days and nights are too cold for these tropical babies. So it's back to the greenhouse for the time being.

Here is the trellis, all prepared for the chayotes. Looks kind of lonely, eh? (The fence on the left will come out eventually, so that the chayotes won't climb on it. The goal, in preparing a trellis for chayotes is to have defensible space, so the plants can't climb something you don't want them to climb.) 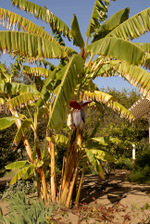 On my last trip to my dad's house in San Diego county while we still are part-owners of the house, I took a few last photos of that wonderful banana tree that Dad loved so much and transplanted when he was 96 or 97. It has fruit set again, and he won't get to enjoy it this time, since he passed away in November of last year. But it makes me happy to see that happy tree growing in the sunlight. 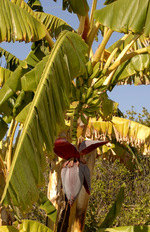 I know it's hard to see the bananas in the shot, since they are in shadow, so I cropped it in on them.

In addition to the bananas, there were the last of the ripe avocados, navel oranges, and Meyer lemons on the tree that I pruned, fertilized, and watered back to health. The Valencia orange has young fruit, and is covered with blossoms so sweet-smelling that they take your breath away when you walk out the back door. (We put a sprig in the car to carry the fragrance with us up the Valley on the drive home.) And the loquat tree was laden with fruit that was just ripening. There was even fruit setting on the little guava tree that he planted in the last decade of his life, and rescued from scale, with my help and advice, using a plastic dish scrubber and a horticultural oil spray. Well, he missed that fruit, but again, the garden is thriving and makes me happy to see. 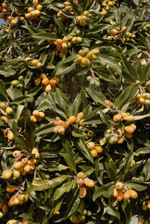