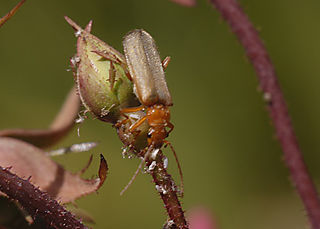 Recently I promised to show a photo of a soldier beetle. Here it is, cleaning up the pahids that were eating my Rosa chinensis. This is the first one I have seen in my San Francisco garden, though I have seen them several times in the East Bay. A colleague at City College tells me that they are often in his Noe Valley garden.

There are over 100 species of soldier beetles in California. The larvae feed under bark or in soil litter on eggs and larvae of butterflies, beetles, moths and other insects. The adults of some species eat pollen and nectar, but the adults of other species eat aphids and insect eggs and larvae. In this case you can see the shed skins of aphids on the stem of the rose bud, but I think the soldier beetle ate up all the aphids and was just wandering around hoping for more. As soon as I saw the soldier beetle, I ran back in the house for my camera, and when I got back it was gone. I was sure it had flown away , but I waited, and soon it wandered back into view.

You can recognize soldier beetles by their narrow shape, and by their soft black, gray, or brown wing covers and often a red, orange, or yellow head and abdomen. All these details are from the Natural Enemies Handbook, by Mary Louise Flint and Steve Dreistadt, Statewide Integrated Pest Management Project, 1998.

Soldier beetles are just one of many naturally-occuring helpful insects that show up when you avoid the pesiticides that kill them along with pests. You don't buy soldier beetles, just give them a chance to help you.

Posted on May 31, 2008 in Beneficial Insects, Gardening and Environment | Permalink | Comments (2)

In July the two crape myrtle street trees became infested with aphids due to water stress and began dropping leaves and dripping honeydew. My neighbor offered the services of her pest control man, and I politely refused because messy as it was, I was sure some water would solve the problem. It took about a month for the trees to recover, but in the meantime the ladybugs showed up (and hopefully soldier beetles) and so did the birds. By the middle of September the trees were showing new growth and the dripping stopped. Meanwhile no insecticide meant the good bugs were thriving on the aphid bounty and the birds were feeding their chicks insecticide-free bugs. I am glad I resisted the short term fix to spray and want to remind all the other readers that sometimes the simplist solution is the best.

I have these in my Noe Valley garden also, and used to think they were harmful until I looked them up. I've seen some also that were much darker, but have the exact same shape.