Did anyone notice that the SF Chronicle, aka sfgate.com, is about to change its home and garden coverage around? They say a newly remodeled section is to appear on Sundays, starting February 1, and that another new section with "home and garden content" will premiere on Wednesday, February 4. My column will be in the Sunday section. (If you are a reader of the column, this might be a good time to log onto sfgate.com, click on "living" and then on the notice about the new sections and send a comment to let them know you appreciate it.)

The continuing tomato late blight reports are terrible, but I am delighted to hear from others who have the problem and begin to hatch a scheme to try to escape it. Also glad of confirmation that the varieties I plan to try have shown resistance in our area.

Thanks for the tip about Seeds of Change carrying Matt's Wild Cherry tomato variety. I had looked at their catalog and missed the listing.  I will order a pack, which should be enough. I am getting 50 or 60  seeds of the several other possibly resistant varieties, and of course I will need to grow a control, like Clebrity or Early Girl just to be sure that the late blight is still capable of killing something.

We won't be starting seeds until maybe the end of March, but stay tuned if you want to get some plants in May.

I thought you'd like to see some successes in the City College Demo Garden this month. We are seeing the various cole crops that were planted early in September come in now. 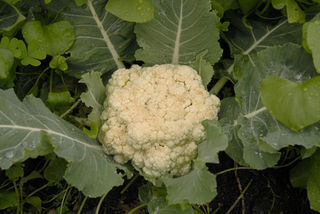 Cauliflower has been heading up very nicely. Thes one is probably 'Snow Crown' a very easy type. We also grew 'Cheddar', which is yellow, like the cheese. It tastes the same as white cauliflower, but adds a little color to the plate and I guess a little vitamin A to the diet. 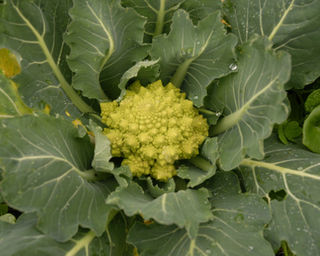 Romanesco broccoli, which some would call a cauliflower comes in between November and January. Lovely as it is, I wish this were the larger-headed heirloom Romanesco I once grew. I haven't found seed for many years now, but the heads were over a foot across, not 6-7 inches like the little f1 hybrids such as this one, Veronica. I am hoping that someone who is lucky enough to travel to Northern Italy will find seeds for the original heirloom some day and find a US seed company to carry them. 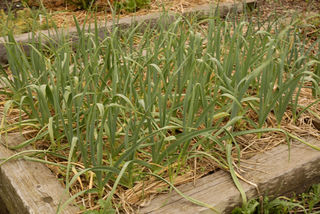 Our garlic is in the middle of its long winter journey from single cloves to fat heads of many cloves. It won't finish until about the end of June, at which time the leaves will be mostly dead and we will dig to see what we have. I have positioned the garlic at the end of a bed away from the source of the drip lines, so that I can pull the lines back in spring when the plants begin to turn yellow. This is to let the soil dry, in hopes of avoiding root rot.

So the garden rolls on through winter. There will be peas to show soon, and winter broccoli. The lettuce transplants are growing, and we are trialing a very cute little red mustard green, spiky, like mizuna, but it is too small to show yet.

In posts of last spring and summer, I wrote about starting chayote squash from the fruits and planting them on a trellis. I haven't shown photos for a while, but the plants covered the trellis and are beginning to set fruit, and I thought you'd like to see. As you can see, the plant on the right, which is the east, is thinner at the bottom than the other, but both did pretty well. I think the soil on the right needs a little more work. I have added extra fertilizer, but will add more compost and fertilizer to both sides in the spring.

To the right of the trellis, you can see the yacon plants. This is their first year in this location, and they didn't get as tall as they were where I had them before. These are South American mountain plants with edible roots. I will be digging them soon and will show photos. 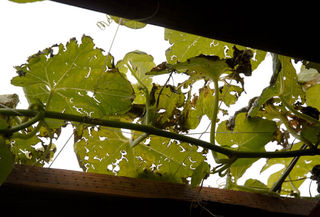 Here is what happened to the chayote due to the hail we had recently in San Francisco. The leaves, especially the ones on the top of the trellis, were shredded. I took this photo the next day, but now, a week or so later, the ones with the worst damage have begun to shrivel. I guess I will have to pull some of them off, since they look awful and aren't helping the plant any. However, it has begun to set tiny squash fruit. Photos soon.

Keep sending tomato late blight reports--see last two posts--I want to figure out how bad the problem is in the Bay Area.

It is wonderful to hear from those who sent comments. So far, we have two yeses, one maybe, and one no. Yes, the blight appears late in the season, which is why they call it "Late Blight." Whether plants get it is a function of whether spores are present, how many spores float onto the plants, weather (it likes mild, moist weather), how healthy the plants are, and whether they are genetically resistant.

Whether you had it or not, it's a good idea to clean up all the fallen leaves and stems of old tomato, potato, pepper, eggplant, wild solanums, etc, and take them out of the garden for a few months in winter. Don't compost the stuff.

Let's do this: Try to test all of the varieties that are supposed to be resistant or "tolerant" that I mentioned in my last post, and see if they compare favorably to the ones that have no resistance. 'Legend' is available from a lot of companies, 'Juliet' from several. No source yet for 'Matt's Wild Cherry'.

I found another that is mentioned as resistant: 'Tommy Toe', a red cherry tomato sold by Seed Savers Exchange and Abundant Life Seeds. I would like to start some of these varieties and have them for sale at the City College Horticulture Department Plant Sale in May. II will try to find a student to do that, and will know in a week or two whether I can do it.

Truth is, that Legend is said by one source to be 5.3 in resistance on a scale of 1-10, and that isn't very good. If we found that 'Tommy Toe' or 'Matt's Red Cherry' had more resistance, we could try cross pollinating one of them with a non-resistant variety and growing the offspring next year in gardens that have the blight. If any of the offspring survived and had larger fruit, we'd be on our way to success!

Well, optimism is better than despair, which is what I have been feeling for a while.

Have you seen this tomato disease?

For the past few years, I, along with many other gardeners, have been losing tomato plants to a disease called tomato and potato late blight. It is the very disease that killed the Irish potato crops in the 1800s and left so many people to starve or emigrate. Fortunately, I am not dependent on my tomatoes for my very survival, but it has been distressing to lose so many tomatoes to this ugly disease.

What I want to know is who else in the San Francisco Bay Area has been having this problem. It shows up as brown lesions on stems and leaves. Often, the stem will have a brown area with green above and below, or just part of a leaf will be brown. The fruit will have a brown, shiny surface, especially near the stem, that usually starts when the fruit is still green. The plant may turn completely brown and die

My photos of this disease aren't scanned, but I can send you to a pdf file from the University of Hawaii at Manoa that shows many photos. It is at www.ctahr.hawaii.edu/oc/freepubs/pdf/PD-45.pdf

The only tomatoes on the home garden market that are said to have any resistance to this awful disease are Legend (resistant unless there are a lot of spores around) and Juliet hybrid (tolerant of the disease, meaning it survives). Anecdotally, something called 'Matt's Red Cherry' has been called resistant, but I don't have a source for it at the moment. Probably there are some heirlooms with some resistance, though I haven't encountered them.

So please, if you will, if you have any experience with tomato late blight in the Bay Area, send me a comment. Or if you do not have the problem, I am very interested in knowing that too! Please tell me where your garden is located--city, general part of city (as in Northwest SF, or Hills of Berkeley).

I have been making test plantings of research varieties that are supposed to be late blight resistant for several years, and none have worked yet. I am hoping to get an idea of how widespread the problem is here and maybe get some attention from tomato breeders.

Thanks for any input you can offer!

I wrote about this weed in my December 31, 08 SF Chronicle column, Golden Gate Gardener. Tried to give you a link, but will need some help from the blog administrator to do it. I can tell you that you can see the article at sfgate.com, click on "Living", then "more Home and Garden," then "Golden Gate Gardener."

In any case, here is the photo 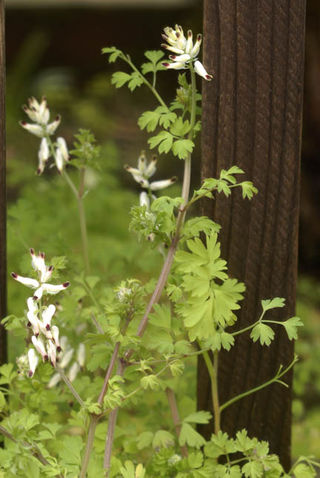 . The plant has pretty leaves. The reader thought maybe it was cilantro.

But no, the flowers give it away. This plant is related to Dicentra, bleeding heart. It is called Fumaria capreolata, or white ramping fumitory. To ramp is to climb up, which it does by tendrils. (You can see a forked tendril on the lower right.) It climbs all through other plants and if you pull on it, it breaks, so you have to reach down through your garden plant and find the base, so you can pull it by the root. It's an annual plant only, so pulling it will kill it, but if it drops its seds, then you will have it next year, and for several more, probably. It's kind of pretty in a closeup, but when you see a whole mass of it, it is untidy and kind of nondescript.

I have been working hard on a writing project recently, but plan to get back to blogging now, at least once a week. I have photos of what has been happening in the City College garden and will be posting them and writing about them. Stay posted for more postings.