A Tree Story and a New Salad Crop

First a story about my apple tree. When we moved in it was a sad little tree, pruned so badly that it wasn't bearing any apples. Now, over 20 years later, it is a fine-looking tree, with many apples every year. But recently it has had some problems with scab, rosy apple aphid, and with the dread woolly apple aphid, a pest that lives in the roots as well as on the branches. 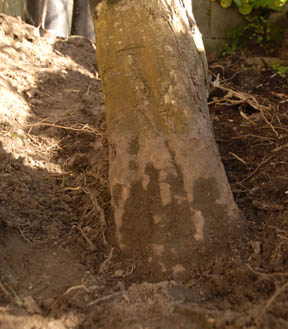 So I was digging out the soil around the tree, since one thing I wanted to try is to dig just to expose the top roots and then pour diluted horticultural oil over the soil and water it in. (The oil I use is made from canola oil, and I diluted it as if for a spray, so the drench is mostly water.) In any case, I was digging away while my friend Lisa, who is an arborist, was doing a little pruning, when I suddenly stopped and called her over. Here is what I saw. The trunk had no roots for the first foot or so, and then I came to the place where the trunk flared out a little bit. This is where the soil should have been all along! It is clear that the people who sold us the house had piled soil aroung the trunk, burying it. This is very bad for a tree, and may have made it more susceptible to the pest that has been bothering it. Look at the right side of the base of the trunk for that little bit of flare. That's the bottom. If you look closely, you can see the change of color on the trunk, from the dirty, previously buried part to the cleaner, not ever buried part. It is right at the top of the last wet streak. Mind you, other arborists have looked at this tree and not noticed. Lisa had said "That trunk bothers me. It doesn't have much flare." Boy was she right!

So I kept on digging. It looks like someone just dumped a bunch of soil at the bottom of the garden, ignoring the tree. Not a good idea. Gardeners out there: Don't bury the trunk of your trees. Not even a little bit. That trunk base needs air, and you will at best make the tree susuceptilble to diseases and pests, or, at worst, kill the tree. 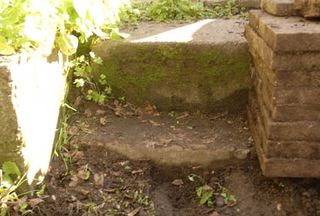 As I dug, I suddenly saw what I should have seen years ago, but didn't: The bottom stair leading down to the tree was also buried. Look at that! The top one is normal height, but the bottom one is very shallow. I have been excavating since this photo and we have had to haul out some of this extra soil. When I get it down to the right level, I will add some mulch, but not right up against the trunk, since that would also limit its ability to breath. I'm glad my soil is kind of high in sand. If it had been clay, I might have a dead apple tree at this point! Meanwhile, in the vegetable garden, I've been trying out some new "greens." This one, as you can see, is really red, or purple. It is the same species as the big purple-leaved, spicy mustard that is rather common. But this little plant is only about 8 inches tall, and is rather mild. It is called 'Ruby Streaks'. Territorial Seeds has it as does Nichols Garden Nursery and Johhny's Select Seeds. There is a lime green version as well. So far, the purple one has grown faster in the cold spring and has a milder flavor than the green one. But both are really striking in a salad. I think they'd be pest harvested at 4-5 inches long for that purpose. Both "streaks" are growing faster than the mizuna mustard we planted. It's a different species, Brassica rapa, while the "streaks" are B. juncea. 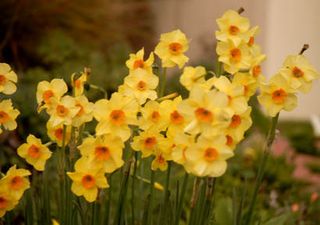 And, just because it's spring, here are some daffodils I shot last week. Happy spring!

I feel like the trunk is buried nine times out of ten when people call about a sick tree or ask at a party. Cheers to your tree for surviving.

Love the daffodils! Mine have recently bloomed as well, though the weight of the flowers is pulling them all over so they're all "looking at the ground" and hard to admire. Oh well...