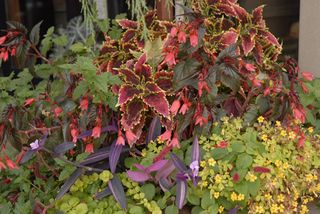 As promised, here are some photos from my trip. We were in Minneapolis and Indianapolis. In Minneapolis, in commercial districts, there were many really handsome container plantings. Nice combinations, well executed. When you remember how short the summers are there, you get the feeling that they put a lot of care into the plants as a special summer treat. The one at the left has coleus, purple tradescantia, an ornamental oxalis, creeping Jenny (Lysemachia nummularia), and a small-pink-flowered begonia.
I am always struck, in Eastern gardens, by the plants that grow well there but not here. In San Francisco, in all but the most protected courtyards, it is too cold for coleus and probably for the tradescantia and the begonia. 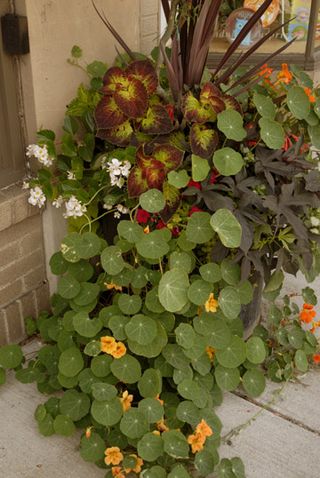 This one depends on coleus amd the tradescantia for color too. There is a purple corydalis in the center, some white-flowered begonia, and a trailing nasturtium. Nasturtium prefers our nice cool weather, so it is special in the East. All of these containers were on the north sides of stores, out of direct sun, so the nasturtium isn't as floriferous as it would be in sun, but I imagine that the shade helps keep it cool. 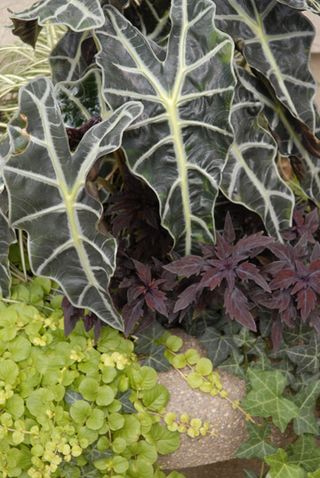 This container planting gives the climate away. The big leaves are Alocasia, known as African mask. It wants warm temperatures and high humidity. It is sometimes sold as a houseplant, but our houses are generally too cool and dry for it. But in a Minnesota summer, no problem. (I'll bet it spends its winters in a greenhouse.) With it is English ivy, creeping Jenny again (chartreuse) and a purple leaved plant I can't identify (can anyone tell what it is?). 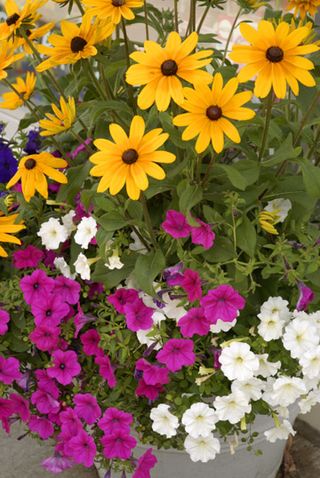 And then there are the more common flowers, such as this pot that contained a Rudbeckia and some petunias, but very sunny and nice. 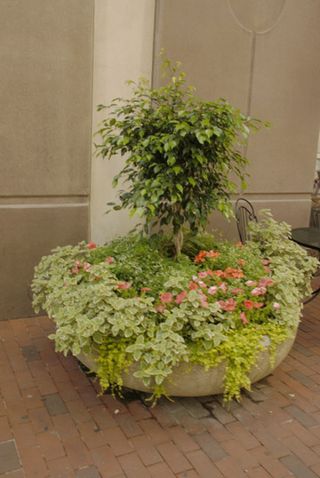 In Indianapolis, in the several commercial neighborhoods we visited, the plantings were less sophisticated and not as well executed. This is the kind that were near the Monument Circle (the monument that is the center of town and has a circular street around it). In the center is a Ficus benjamina. Around it are flowers and foliage. I can't quite see what they all are. There were short zinnias in a lot of these planters, so maybe that's what the flower is. There is some creeping Jenny. Many of the containers in Indianapolis, though not this one, had the chartreuse-leaved ornamental sweet potato in them. You know, the one that barely grows in San Francisco, just making a couple of feet of big chartreuse leaves. Well, in Indianapolis it grows like crazy. In a lot of the planters it has clearly grown faster than expected, engulfing zinnias and dwarfing small corydalis plants that are in the center of the large pots. Again, warmer summers.

I am always struck, when I travel East, that they try to attain a tropical look using plants we struggle to grow here, houseplanty stuff like the Alocasia and the coleus, but they can't grow the really cool subtropical stuff that we depend on for a tropical feel, such as the princess flower, angel's trumpet, big tall shrubs of fucshia, melianthus (honey bush), tree ferns, etc. That is, they can grow them, but they have to go inside all winter, where they would prefer a cool greenhouse, but probably get one that is too warm for them. So they never look great or get really big.

I see magazine photos of Eastern tropical-look container plantings all the time. They sure look great and the the fact the magazines are being sold here, seems to imply the plantings are universally appropriate. But our climate is different. We need local advice and plant lists for our gardens! All gardening is local.

That was a great article in the Chronicle about your new edition of Golden Gate Gardening..(my current issue is well used). I particularly liked the lessons your father passed down to you. I was lucky enough to be raised on a 95 acre ranch near Morro Bay CA and learned the names of wild plants and grasses in the same fashion. Now my garden in the Mission Terrace neighborhood looks a lot like yours pictured in the article. It's not a Sunset Garden show piece, however, it is a productive play land that produces seeds and vegetables that I now can take back to the ranch from my 'City Garden'. I do not have the excitement and annoyance of the deer, wild pigs and turkeys that are on the prowl for food like the ranch. Didn't see any deer in your garden either! Another green that grows like a weed in my garden is mache or field lettuce. It is eaten with soft boiled eggs in Switzerland. Thanks again, Robin Mize

Amazing pictures of the container gardens! I agree with you that all gardening is local. Planning for a water-wise garden in drought regions like California is vital. We need to watch the amount of water that our garden or landscape consumes every week. Visit http://j.mp/NBgXw and continue to enjoy gardening!

The purple leaved plants looks like Coleus 'Lancelot Velvet Mocha' to me.