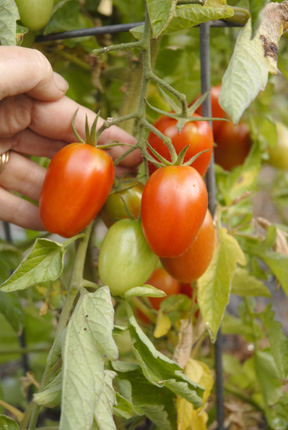 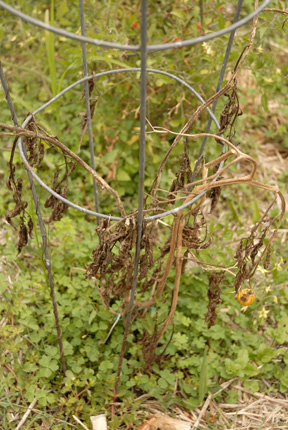 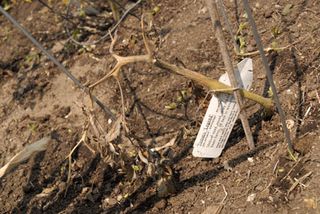 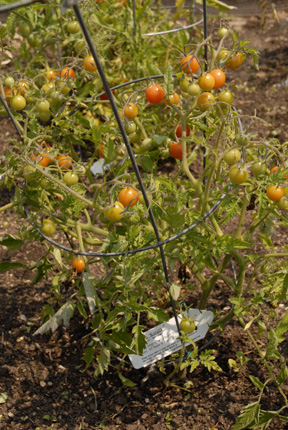 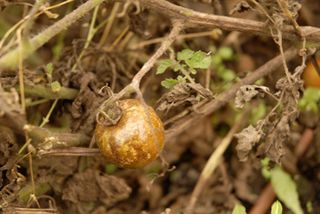 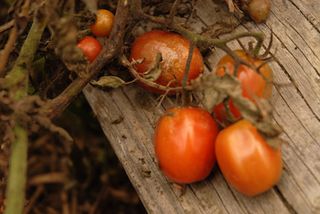 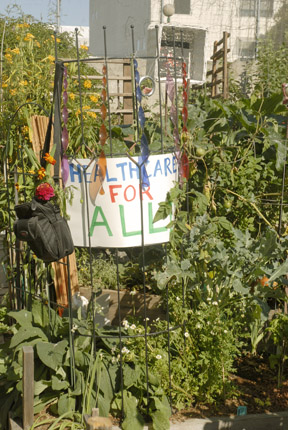 The more common disease around here is late blight, caused by Phytophthora infestans, and that sounds like what you have, because the leaves were just suddenly dead. I presume they just turned all brown. The plants are indeed likely to die. The important thing is that if you do remove them, you should take them out of the garden and pick up every fallen leaf and remove that too. Don't compost any of it.

(If it is early blight, which is caused by the fungus Alternaria solani, you will see small irregularly shaped dark brown spots in the leaves about 1/32 to 1/2 inch in diameter, with concentric rings of different shades of brown in them, often surrounded by a narrow yellow halo. If there are many lesions, the leaf will turn yellow and drop off. You might see concentric-ringed lesions on stems and fruits as well.)

I live in Daly City about 1.5 miles from the Ocean. I planted large potted early girl tomatoes from Home Depot in March. I think I have early blight the planted are (were) about five feet tall and about two weeks ago I noticed a lot of dead leaves. I pulled one plant two weeks ago and five more have been hit.
I pulled all the dead and nearly dead leaves from the plants and am wondering if should just pull the plants up?

I am down in Santa Clara and presumably late blight is less of an issue here. My tomatoes were all very late to fruit. My best producer has been the Green Zebra. No sign of blight in branches but some mold growing in tomatoes that have split from rain. I have tons of Green Zebras still on the vine, was just waiting for frost to do them in. Am I inviting late blight by keeping these? Should I harvest branches and try to ripen indoors with the branches in water or just harvest the green ones and hope they ripen on the window sill?

I planted SF Fog couple of years ago at the sunniest spot in my yard in Visitacion Valley. It was a great producer and seem very resistant to blight; good flavor though the skin is thicker than I like.

I have seen rats a couple of times. I'm not entirely sure it's rats stealing my tomatoes and strawberries, but they seem to be the most likely culprit. (I found a skunk in the yard once too, and once a few years ago we had raccoons come into the house--but at that time the yard was waist-high weeds, and I think keeping the weeds down for gardening has actually deterred the raccoons.) I live on Clement St with tons of restaurants all around, so I really don't think there's much I can do to keep rats away. If I tell my landlord about them he'll put out poison, and I don't like that.

I have been completely stumped as to anything I can do--on rented property--that would keep the rats away from my produce without keeping me away from it too. I could wrap my plants in bird netting, but that is such a tangle to deal with when I want to access the plants.

Nope, I think you should have taken the blighted plants out of the yard altoghether. The spores could be splashed or blown from the diseased plants and can travel up to a half mile. That's the problem with this disease. I agree, out with the jalapenos as well. Sad, but this should reduce the number of spores you start out with next year.

I am going to try to see that CCSF has 'Juliet' and a currant tomato at least in the spring plant sale. I'd like to see more 'Millionaire' eggplant too, since this variety gave me a substantial harvest of eggplants for the first time ever in my Mission District garden last summer. Heck, it even set fruits at City College, but they didn't get very big.

We still have, by the way, a few plants of African blue basil and of a tropical, perennial, hot pepper (which seems to not get the blight) that will be available in the CCSF fall plant sale. It will be December 10, 11-3. The blue basil doesn't look very good, and would have to be protected over the winter, but I think it has plenty of roots, so fertilizer should perk it up very well.

Rats are certainly causing a lot of problems in SF gardens. Have you seen them? If they are in your garden, they are probably living in some structure nearby. They are also attracted when people put out cat food.

I ripped out my blighted tomatoes--that is to say, all of my tomatoes--a month or two ago. I didn't put them in the compost that I use for fertilizer, but I did throw them in the pile of yard waste where I toss weeds and things. (I know I could put weeds in the fertilizer compost and sometimes I do, but even between the worm bin and the tumbler we run out of room for our kitchen scraps sometimes. There are a lot of rodents around so I like to keep the kitchen scraps secure.) Is that good enough, do you think?

I do have a couple of early jalapenos still out there, and though I think it's unlikely I'll ever get any fruit off of them, there are half a dozen pea-sized peppers that I thought I'd let alone until there was no hope whatsoever of their maturing. I suppose I should rip them out too, then?

Or maybe I won't plant tomatoes next year. My partner really wants me to grow them and I have had some success in the past, but the cards seem stacked against me for 2010. (I didn't get a single tomato in 2009 between the blight and the rats.)