I promised a photo of the 'Imperial Star' artichoke seedlings I've been growing, and here they are. Just as 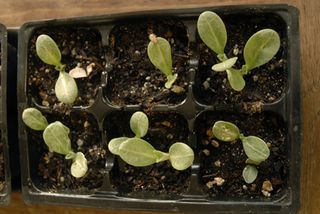 predicted by the vendor, I didn't have perfect germination and some of the seedlings were albino. I planted maybe 22 seeds and got 18 seedlings. Of the 18, two were albino. You can see one of the albinos in the upper left hand cell, the tiny pale plant to the right of the larger green one. Albinoism is more serious in plants than in animals, since the lack of color is caused by a lack of chlorophyll, and no chlorophyll, no photosynthesis. No photosynthesis, no growth. That is, no growth after the little bit of stored energy in the embryo within the seed is used up. So, as you can see, the albino is smaller than the plants that have chlorophyll. I have potted up the green seedlings now, and will shoot them again when they are a bit bigger.

Another tip from the vendor is that the artichoke seedlings with smoother-edged leaves will make the better chokes. Too soon to see that. The first two leaves on these plants are the "seed leaves," the ones that were in the embryo. They are just that simple oval shape, not the shape of the true leaves. The true leaves are just visible forming at the center of these seedlings.

Meanwhile, we had some very cold weather last week. I had frost in my garden on the mornings that hills near the city, such as Mount Diablo, had snow. Following are four images of frost on plants. All have recovered now. The first two are a bergenia plant. This species is native to the Himalayas, so it is prepared for considerably more cold than this. 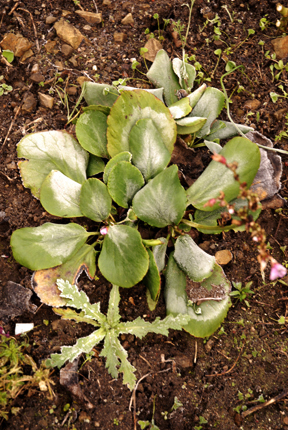 That's a poppy seedling below the bergenia. 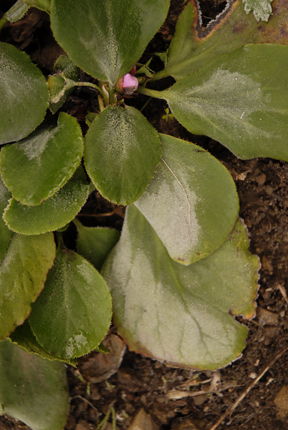 The next image shows an ornamental thyme called "lime thyme." It has a nice bright green color and I have used it to edge a bed. It is native to southern Europe, but can take a little frost. 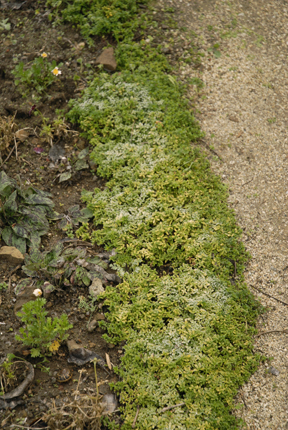 Finally, here is a sedum. Again, a European plant that is relatively frost hardy. 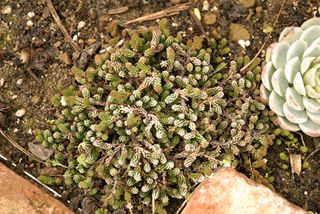 I brought a few potted plants into the basement for the period of frost, including  a Crassula falcata, an orchid cactus, a few epidendrum orchids, and one pink-flowered zonal geranium. After I brought them in, I realized that all of them came from Southern California. All but the geranium came from my Dad's garden, and the geranium was one I gave to my husband's mother in Los Angeles. San Francisco is on the edge of too cold for it, but there is the sentiment, you know, and the very bright flowers, so I am willing to baby it.

After the frost came the rain. At least it's warmer! I love seeing it rain, but wish there'd be a bit of sunshine every once in a while.