The Potatoes are Finally In the Ground!

I bought some Russian Banana fingerlings from Ronnigers Seed Potatoes  (www.ronnigers.com) and have planted half at the college garden and half here at home.The ones at the college went in on February 20th, during a class, but it took determination to get the ones at home into the ground, because of my tight schedule teaching and giving talks to promote the book. (Their little sprouts were starting to form and I know if you wait too much longer they will grow themselves out without having the energy to make more potatoes!)

At both the college and at home, my first step was to tarp the area I intended to plant. That is, I tarped it every time it rained and untarped it when the rain stopped. This allowed the soil to dry between the storms to the point that it was OK to dig. (You pick it up and squeeze a handful, then see if it breaks apart easily. If so, it's dry enough.) 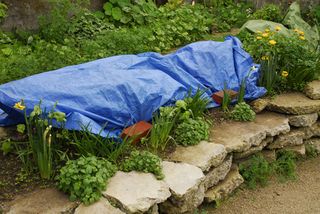 Here's a photo of the tarped area, weighted with bricks so it won't fly away in a wind. There is a second tarp, a green one, in the upper right. I put upside-down five gallon buckets down the middle of the bed, and put the tarps over them, so that water would flow down and off of the tarp, rather than puddling in the middle. Between the two tarps are a yellow calendula (edible flower) and several plants of flat leaf parsley. They just came up there, from last year's fallen seeds, right in the middle of the long bed. I I couldn't bear to remove them, since they are pretty and I have been using them in cooking. (I use the Calendula "petals" in salads and the parsley in all kinds of dishes.) So I just tarped left and right of them and left them in the light (and the rain). 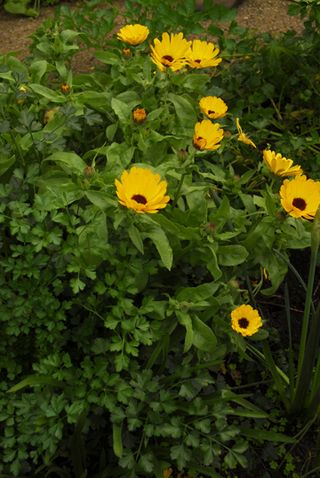 So I weeded out all the other stuff that was in the beds, added soil amendment and fertilizer and planted the potatoes. I'm using a trench method. The potatoes are 4 inches deep at the bottom of the trenches. When they have emerged 5 or 6 inches from the ground, I plan to pull soil from the mounds over them, leaving an inch or so showing, and levelling the ground. When the plants have growsna few more inches, I will mulch the bed. The potatoes form on the part of the lower stem that is underground, while the plant is young, so gradually burying more stem will, hopefully, help encourage more potatoes to form. 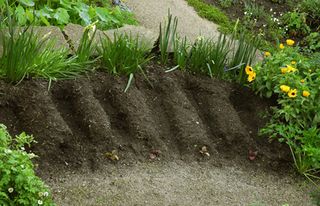 And there is half of the planted bed. It's the end where the green tarp was, seen from the other side. (You can see the calendula and parsley on the right.) In front of each of the mounds, I've planted a tiny lettuce seedling, for which I have great hopes. I should say that this whole area is still in winter shade. It will be interesting to see how far the potatoes are up when the sun is finally high enough to reach this bed. I'm hoping it gets there just in time to get them going. So far, however, not a trace of potato aboveground. But then, 4 inches is a long way to go and it has been rather cold. When they emerge, I'll take more photos. Estimated homegrown potato salad time: June 1st. (P.S. Have you checked out the potato salad recipes in Barbara Kingsolver's book Animal, Vegetable, Mineral?)