You may have noticed that I am doing a "How-To Night" on Wednesday, April 14th (see calendar in previous post). Perhaps you wondered what that could mean.

Here's the scoop. There's a popular San Francisco monthly event called "Ask a Scientist" at a South of Market restaurant. People go to eat and then listen to a scientist explain something. Well, the same person who began that series, Juliana Gallin, has now begun a second series, called "How To Night" at the Bazaar Cafe, 5927 California Street (at 21st Ave.) in San Francisco. (She says that this is the cafe that originally hosted the "Ask a Scientist" series.)

The event is free, though making an evening of it by ordering something to eat or drink is encouraged. You can learn more about the cafe at their web-site: www.bazaarcafe.com. or by calling them at 415-831-5620. You can read the short history of the How-To series at www.julianagallin.com/howto. (She is looking for more people who might like to teach some skill in a classor who have a request for a class to teach something.)

So come on over next Wednesday night and let me help you get started growing vegetables, herbs, and edible flowers in San Francisco's cool (cold?) and foggy summers--and through the rest of the year too! I will bring the new Golden Gate Gardening to sell and will be happy to autograph copies.

Meanwhile, in the garden, it goes on being spring. I have been shooting my tree peony, which didn't bloom last year, and has only one flower this year--but what a flower! When I was a child we had a long row of regular peonies between our front yard and that of the neighbors. They bloomed in late May. One of the most beautiful of flowers, I think.

San Francisco doesn't get enough winter chill for regular peonies, but it does for tree peonies!So here are the teasers (the opening bud). 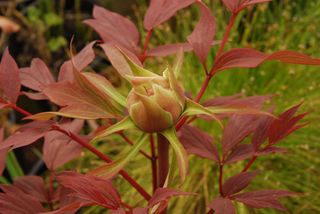 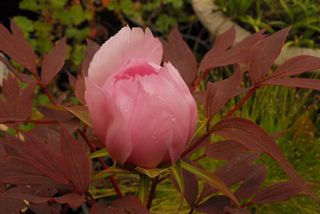 More next week when it's fully open. Also, my potatoes are up, and I will shoot them before and after I fill in the trenches around them.