The Transplant of the Scarlet Runner Beans

This spring we dug up the scarlet runner bean roots at the college garden, weeded the soil thoroughly, amended and fertilized it, and, with help from several students, built them a new trellis. The roots of this wonderful perennial Central American bean are thickened. This is how the roots of the largest of the plants looked. (We left some of the stems on at the top, because there was still some life in them, and so we would be sure to know which way was up when we replanted the roots.) I think this particular plant may be 15 years old. We wrapped the roots in burlap, and they sat there for about 2 weeks while we got the site ready to replant hem. It was Februrary into early March, and it rained a bit. 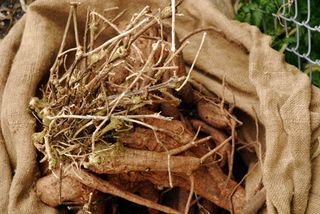 We put the burlap-wrapped roots in the shade, and I sprinkled them with water when it had been dry for a while. But once back in the ground, they began to grow very quickly. The first couple of shoots were leafy, but there was a full stem of flowers right away. And look at it now, in mid May.

I think we will have pods to harvest by the end of June! Shows the value of letting some roots overwinter. If we had planted fresh seed in April, which is about as early as you can plant them, we'd have one stem growing now from each seed, and probably no flowers yet. But from overwintered roots, we have a couple of dozen stems with six or 7 stems of flowers already. 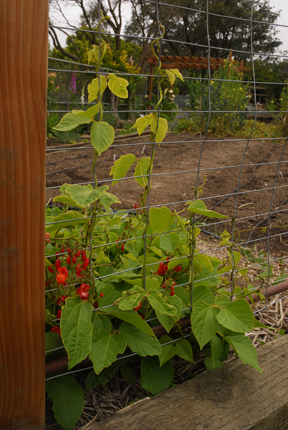 Here is the plant from the other side of the trellis. You can see that it twines counterclockwise, the opposite of the common garden bean. Runner beans are mountain beans from Mexico and Central America. They like coolish days and cooler nights, so they are ideal for coastal California. The roots survive a little frost, but wouldn't thrive where winters were cold. The pods, harvested young, are very tender, with a sweet and beany flavor. The seeds, when mature and dry, are big black and purple soup or chili beans. Now, in late May, is about as late as you'd want to plant 'em.

Today I spoke at Guadalupe RIver Park and Garden in San Jose. They have a new community garden down there, in the park, which filled up right away and has a 97 person waiting list. They are about to put in a second community garden. Way to go!

Next week, I will be at Common Ground in Palo Alto, to give my talk on Weather, Climate, and Microclimate--from the region to the neighborhood to the different sides of a garden. Always fun to talk about. Our region's microclimates are so complex that I have to tell the principles and then teach gardeners to read the microclimate from the garden. (see listing in this blogs top post)

I recommend leaving the runner bean roots in the ground as a general rule. We took them out last winter only because we had to rennovate their setting. Of the four we took out, three survived. The smallest one did not--not enough storage in it yet to survive the shock. The others were at least several years old.
I picked my first slender pod from the big old plant yesterday. That is a good month before I would have seen any from a first year plant from seed this spring!

I love scarlet runner beans, but somehow never realized that they're perennials! Started mine from seed this year and they're moving slowly as you said, but think they'll have a nice long growing season in front of them here in the Odgen St Community Garden in Bernal Hts. Will definitely try leaving them in the ground or root-saving for next year. Thanks for the tip!

Pam, I thoroughly enjoyed your presentation last Saturday in San Jose. As I mentioned, your book has become my Gardening Bible and I am excited to have the most recent edition. I hope you get a minute to read my Gardening Blog at: http://wspagnola.blogspot.com
Thank you for inspiring me,
Whitney Spagnola