Spring into Summer in the Vegetable Garden

In San Francisco, we are reaching an important seasonal milestone in the food garden, one that slips by many without notice. This is an important time for those who want to have a year-round garden. It is the time when planning and planting shifts from spring planting to summer planting. I have now planted almost all of my warm season crops, the ones that need our poor excuse for summer warmth, and am about to plant cool season crops--the ones that will grow into fall and even winter.

Among warm season crops, this is my "year of the eggplant." Because 'Millionaire' eggplant did so well last summer, I've planted that again, along with two other contenders, 'Bride' and 'Long Purple'. The last one is just off of a seed rack. They are all Japanese, long, narrow, purple-fruited types. Since it's a trial, I planted all three kinds of seeds on the same day, potted them into larger pots on the same day, and planted them out in the garden on the same day. I started them on the windowsill of a big, southfacing window, then moved them outside, bringing them in at night (I'm glad that stage is past!) So far, the 'Millionnaire' seedlings have a better survival rate and are larger than the others. I started with 10 or 11 seedlings of each, but by the time I set them out in the ground, I had only 5 of 'Bride' and 3 of 'Long Purple'. I randomized their arrangement in the garden by making up the labels first and then drawing them out at random as I planted the seedlings, so that position in the garden wouldn't determine success. They are in my community garden in the Mission, wihich is warmer than where I live. My fingers are crossed. IIf 'Millionnaire' performs well again (if last summer wasn't a fluke) I will put it up against some other eggplants, a better researched set of opponents, next summer.

I also planted a few tomatoes and peppers, without great hopes, considering our generally cool summer weather and the late blight that has plagued our tomatoes. One of the tomatoes is 'Juliet', which survived late blight last summer, so I may get at least a few fruits from that one. The squash is up, the purple podded bush beans are starting to bloom, and the cucumbers are about 7 inches tall. I have started beans for shell beans at the beginning of June, in hopes that they will be ready to harvest during my fall City College class. I plan to plant some romano bush beans this week and maybe some French filet beans too.

As to summer plantings, I plan to plant more carrot, parsnip, and beet seed directly in the garden in July, and just ordered seed for cabbage, cauliflower, Brussels sprouts, broccoli, kohl rabi, and Swiss chard seed. I will plant that as soon as I get it, to have seedlings to plant out in class in August. I have leeks growing at the college garden that were planted, when, maybe in April. They are looking hearty enough to transplant now, for fall/winter harvest.

Chayote Report: I continue to have hopes for chayote at the college garden. I have planted out 3 new plants, started from fruits purchased at markets. I don't know if my spot is warm enough or if I needed better cross pollination or what, but I got no fruit at all the first winter that 2 plants were growing, one fruit last winter, when only one blooming plant was in the ground, and then that one plant died. Someone sent a comment that I could have hand pollinated the flowers. This is true, but the plants are on a tall trellis, so many of the flowers aren't easily reachable, and note that they are tiny. Also, I think they do better if pollen comes from a different plant. And, at base, I am interested in seeing whether the plant can make it and fruit on its own in the college garden. If it can't, then maybe it isn't a good plant for this microclimate. In any case, here is a photo of the one and only fruit produced last winter by the chayote plant at the City College garden. Not very impressive, is it. (Sigh) Well, I haven't given up yet! 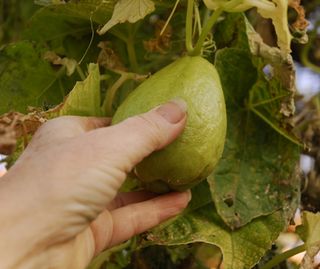 First year in the bay area - in the outer sunset. Just reporting that I've already lost my stupice tomatoes to late blight and my juliet is not far behind. The San Francisco Fogs seem to be fighting it though. We will see.