Home Archives About Pam Peirce Events Subscribe
Spring into Summer in the Vegetable Garden
Rootstock Roses--what are they?

Syrphid fly in my backyard garden

Last week I was out early in the morning when a spiderweb hanging between a chair and a columbine was still decorated with crystalline dewdrops, each one a rainbow. I was checking what was coming into bloom, when I noticed a handsome sryphid fly on a potato plant. It was still sluggish from the slight morning chill, so I thought maybe I could get a photo. I ran up to bring down my camera with a close up lens, and lo, it was still there. So here is the my best shot. 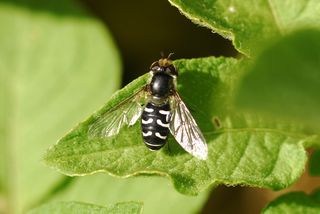 I am always glad to see a syrphid fly, because their larvae eat aphids and other soft-bodied insects. This particular syrphid fly is a bit smaller than a honeybee. It looks kind of like one, but those markings are just to fool a predator. You will see syrphid flies hovering around plants, like little helicopters. Because of the way they fly, they are sometimes called hover flies, and because they hover around flowers, they are also sometimes called flower flies. They may be striped or may be single-colored, and may be much smaller than this one, but by their hovering shall you know them.

Look closely at the insect, and you will see that it has only 2 wings. That is characteristic of flies, which are in the insect order Diptera (di=2). Most insects have wings, and all the other ones have 4.

A couple of weeks ago I gave a talk at a garden club in the East Bay. It was outdoors, in a garden, so instead of bringing a show of photos, I brought some vegetables and vases of flowers, some edible, others to attract beneficial insects. As I was talking, a syrphid fly came along and checked out the flowers. It considered seriously the collard flowers in the bouquet of edible flowers, but rejected them and settled on the parsley flowers in the vase of flowers to attract benificials. Point well made.

I adore hover flies. I now have bumblebees with same pattern of hovering and wonder if they are a special kind of bumblebees, or...? It's hard to keep up w/ all the wonderful pollinators! But I do my best to encourage and protect them.

Of course a syrphid fly isn't a beneficial "pest" but a beneficial kind of insect.
However, what you have on your blackberry bushes is a pest insect. It is probably the dread Spotted Wing Drosophila, which has recently shown up in California, and is a very bad pest indeed. It's the larva of a fruit fly.
Read my column in the SF Chronicle (or on sfgate.com) that will appear in about 2 weeks, since I will explain more about this pest in it. (It should appear on about the third Sunday in July.) Also look at the column from March 21, 2010, in which I wrote about it as a pest of strawberries. I will write more about the pest in my blog after the July column appears. Not much you can do right now except remove infested fruit and by the end of the season make sure you have picked all of the fruit and picked up any fallen fruit you can find. Next year, there are things you can try. To be continued...

Interesting info on beneficial pests. My black berry bushes have been taken over by a white 1/4" long worm that seems to be coming out of the core of the berry. Last year I found a couple of "worms" but this year the entire crop is infected. How do I get rid of these? Do I spray now (and with what) or wait until they bloom again in late winter?