A couple of weeks ago, I wrote my column Golden Gate Gardener, on www.sfgate.com, about rootstock roses. That is, I wrote about the roses that provide the roots onto which the stems of more desireable roses are grafted. I used the following photo to show what can happen: 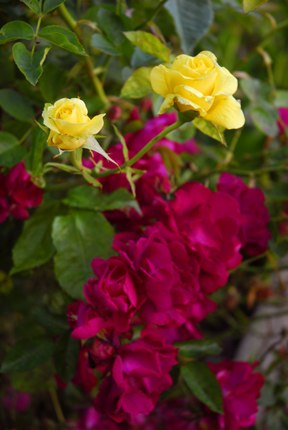 That yellow rose was the original one the gardener purchased. The red ones are growing from below the graft union, near the ground. No one cut them off, so they kept on growing. They are more vigorous than the grafted rose, because they are growing on their own roots, so they are likely to overgrow the yellow one and may very well kill it. This has been going on for this particular plant for several years. The gardener made a half-hearted attempt to cut away the red rose branches, and now seems to be ignoring the whole thing, so I am bidding goodby to the yellow ones.

I started to research what the red rose might be and discovered that while there are hundred of grafted rose varieties, there are only a handful of varieties commonly used to provide rootstocks for them. The most common red one is called 'Dr. Huey'. It's a wichuriana climber, bred by Captain George C. Thomas Jr., and named after Dr. Robert Huey another rosarian who had encouraged him. It is also sometimes called 'Shafter' after the town along Hwy 99 in California where many commercial roses are grown. The roses are red, averaging 2" in diameter, with 9-15 petals, and many stamens that stand up in a ring at their center,

That all sounded right, except that 'Dr. Huey' has flowers borne singly, that is, not in clusters. This rose blooms n clusters of 3 or up to 7 or 8, so it has to be a different variety. 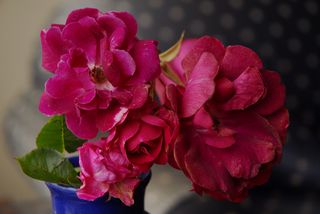 I also noticed that the stamens didn't stand upright, but bent out from the center before turning upward. Hmmm. What could it be? 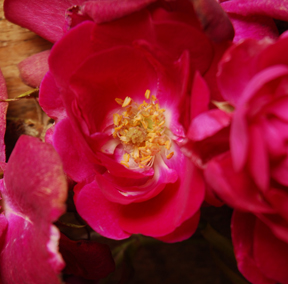 With further research, I found that there is another widely used red rootstock rose, 'Ragged Robin', which has large clusters of bloom, borne in flushes throughout the season, which, now that I think about it, is true of the one in the photos. It is a China rose, Rosa chinensis that was oiginally introduced in France as 'Gloire de Rosmannes'. (That sure sounds more elegant than 'Ragged Robin', doesn't it! I wonder when the name shifted.)

I called Jackson and Perkins Roses and sent them photos, to see if they could confirm my guess, and a rosarian there agreed that 'Ragged Robin' it is.

Rootstock roses are chosen for ability to grow in a wide variety of soils and climates, for vigor, for ease of rooting, and how well they accept a bud from a different variety chosen for its flowers. 'Dr. Huey' is popular because it is very good at all of this. Apparently, it  is a part of rose growing history that a bundle of cuttings of 'Dr. Huey' got mixed up with those of Gloire/Ragged cuttings in the Armstrong Roses growing fields and this mistake revealed that 'Dr. Huey' was a better rootstock. (Sorry, but my source didn't say how 'Ragged Robin' was inferior.) But both of these roses continue to be used, as well as several of other kinds.

So the take home message is that rose plants shouldn't have two kinds of roses on them.. (I'm not talking about 'Joseph's Coat', a climber that naturally has red and orange roses and blends on one plant. Nor am I talking about Rosa chinensis mutabilis, the blossoms of which age from peach, to pink, to purple before the petals fall. I'm talking about a rose that suddenly has branches of flowers of a different color. Look low on your plants for the jog or bulge where the graft occured and don't let branches grow from below it or emerge from the ground. (Sometimes you can tell by the different leaves or thorns even before one of these rogue stems bloom.) If you get them while they are young, you may be able to just yank them from the plant, which makes them less likely to regrow. Failing that, prune them to the joint with a stem that has the original kind of flowers.

The city of Riverside has a ten mile long historic street called Victoria ave. It was once lined with all kinds of roses 50 or so years ago. Now they have all reverted back to ragged robins. It's quite nice though.

Thanks so much for this tutorial which I have linked back to on my latest post on Plant Whatever Brings You Joy. You probably rec'd pingback notice. Very helpful. Curious, now, what might have been growing on my rootstock prior to its taking over. But I will never know. :)