We dug the potatoes in July...

And it took me this long to let you see how they turned out. Sorry. This was taken in my backyard, where 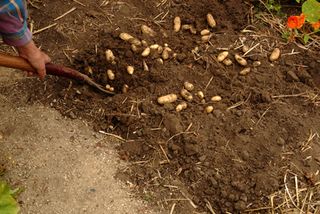 the potatoes were smaller and fewer than at the City College garden. Makes sense, because what with the redesign of my garden, and the fact that this part hasn't been used for vegetables, I have just begun to amend this soil. I hope it will do better in the future as I add more organic matter. 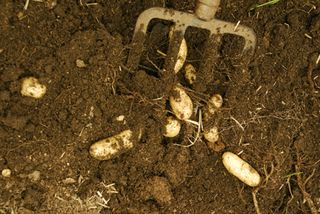 These are potatoes being dug at the college garden. Here, we got 27 1/2 pounds of potatoes from about 28 square feet. I didn't weigh the ones in my back yard, but I think I only got about a 5th as many. Shows what good soil can do!

Note the digging fork. Use a digging fork to dig potatoes, so you will cut fewer of them than if you used a shovel or spade. (Digging fork, not pitchfork. A digging fork has wider, stronger tines. A pitchfork has thin, weak tines, useful for pitching compost or hay, not strong enough to dig with.)

Check out posts from earlier this spring to see how we planted the potatoes in both gardens. They started out 4" under the bottom of 4" trenches, then we filled in the trenches, then mulched with straw, as the plants grew.

These were Russian banana fingerlings--fingerlings because this is one of the varieties with that long, fingery shape. They have been delicious in soups and stews or cut up and roasted after rolling them in olive oil and herbs. 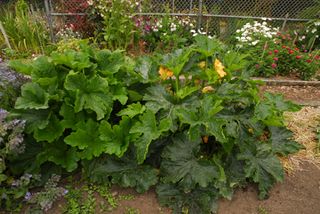 Next, here is a shot of two nice big zucchini plants. I put this in to show, again, the value of working on your soil so that it is rich in organic matter and well fertilized. These plants are nearly 3 feet tall. There are 2 or 3 together in each of the 2 "hills" of squash. It is also growing in "full sun," if you can describe it like that after 45 days of fog, fog, fog. Seed was sown in in early June, then we put row cover over the planted areas, because snails or slugs were eating the seedlings. We put bubbles of row cover over each group of seedlings, tucking the edges in the soil well, and put a drip irrigation line over the row cover, so that there was a drip emitter just over the center of the group of seedlings. When the plants were big enough to have prickly leaves (which snails and slugs don't like) we uncovered them.

Beginning gardeners often buy squash plants from a nursery that are overgrown in the pot, maybe even already blooming. These will be rootbound, which squash plants do not handle well. It stunts them. That, combined with inadequate fertilizer and water, and with partial shade, often results in small plants.

Oh, these are a Romanesco type (left), which has striped and ridged fruit, and 'Dundoo' from Johnny's Seed's, a dark green-fruited zucchini that is supposed to be powdery mildew resistant. Both kinds held up pretty well in all those weeks of fog, but both, sadly, have some powdery mildew now. I've begun to take off the worst leaves, the ones covered with spores, before they spread the disease all over the plants. But these plants have been putting out lots of fruits. Hard to keep up with them, and we have two more, so I'm glad to have a class to help share them.

In news from the garden book world, the new edition of Roz Creasy's book Edible Landscaping is to be released November 1, 2010. It's a big book on designing your landscape to include edibles of all kinds. The first edition, from 1982, was illustrated with watercolors and line drawings, but this one has her wonderful photography. Do check it out.

Nice to see such large veggies growing in the ground. I used to have an outdoor garden and sell some of my produce, but I now live in an apartment and grow all my plants in containers.
They don't get quite as big, but me and my daughter do okay with some lovely produce.
We will be looking for some more space soon to get back into a lot more.
Fresh food is just so wonderful.
Happy Gardening from Marty & Karin
The Potted Vegetable Garden

I also love gardening a lot! And you are one of my inspirations.