This past summer, as you noticed if you were in San Francisco, was miserably cold and foggy. Of course tomatoes were later than usual, though with so much late blight in play, tomatoes aren't something I grow very much these days. But in the City College garden, even the beans were uncooperative.

The romano beans (Italian flat pods) didn't set any beans. I didn't think that would matter, since what you eat is the pod anyway, but the unfertilized pods were short and curved and they weren't very broad either. Late in the summer, when we had a little warm weather, some more pods set that were fertilized (had some immature beans in them) and they were longer, straight, and wider. Mind you, the little, empty, curved romano pods were tasty enough, but you sure had to pick a lot of them to get much to eat. I planted a few pole romanos too, and they had very poor pod set, with the few that formed being curved and narrow, without beans, like the bush romanos. 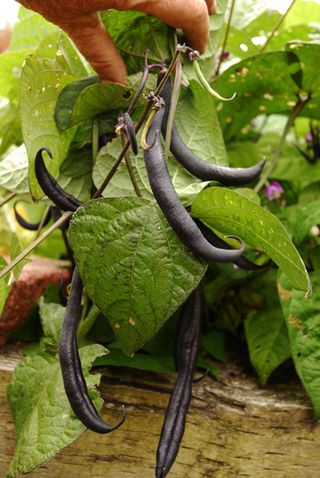 The bush purple pod beans did OK, as you can see from this photo, which I took in July. The pole purple-podded beans, though very late (just started bearing just a few weeks ago) are forming nice long, straight pods. The filet beans did fine, but then you harvest them when they are still tiny, before they have a chance to be fertilized, so they are bred to be shapely at that stage.

Even the runner beans behaved badly. These, a different species, with red flowers and large pods, had a nice early crop that was over by early summer, and then practically nothing. Not the usual late summer second crop. Only a few stray blossoms here and there. And this is a bean that is usually undaunted by our cool summers.

Beans don't like hot weather, being fine with 70 or 75. But they didn't like last summer any better than I did. Fall is here, and I still want a little bit of summer! Well, maybe we'll have better luck next year.