Another Year in the Life of An Apple Tree 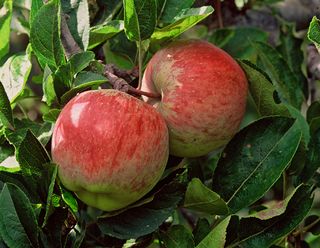 Our apples at their best.

In the ongoing saga of our apple tree, a tree of unknown variety but good fruit and usually good production, another harvest is past. This year we finally got rid of the woolly apple aphids, after two years of spraying the insects with rubbing alcohol (right out of the bottle) weekly and 2 commercial canola oil sprays each winter on the dormant branches. Because the insects spend part of their time in the soil, we also used the canola oil pesticide as a soil drench twice each winter, watering before and after we sprinkled it on the soil surface (an off-label use the idea for which  I got from reading research reports about the pest in the East ). 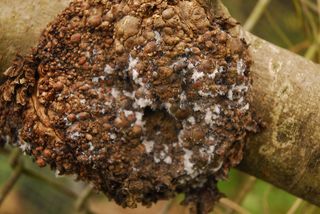 Woolly apple aphids make huge galls where they suck sap from the branches, as they have done here on this pruning cut (not on our tree, thank goodness!). They are reddish aphids, but are covered with a white waxy fluff.

We also think it helped that we discovered the trunk had been buried a foot or so deep yea all these years, since before we bought the house, and unburied it. A buried lower trunk is really bad news for any tree.

But because we were paying so much attention to the woolly apple aphids, we forgot to spray sulfur to prevent scab, the disease that makes surface blemishes on the apples. We were also lulled by the dry early spring into thinking that scab wouldn’t be a problem this year. The early-setting fruit did fine—no scab. Then the spring turned wet, and the later-setting fruit was attacked by scab. (Our tree is borderline for getting enough winter chill, so sometimes it blooms over a long period.) Some of the later forming fruit was so affected that it was stunted and malformed. 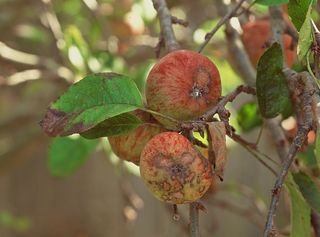 Some of our apples with scab disease. Note damage to leaves from the disease as well.

However, overall the tree became so vigorous (when liberated from the extra foot of soil and freed of the stem and root sucking of the woolly apple aphids) that we wanted to be sure to give it a summer pruning to curb its excess growth. But the summer was so cold and foggy that the tree seemed always to be wet. So we put it off, hoping for a dry day. That day came, Lisa pruned the tree, and boom, we had a heat spell. So some of the apples developed sunburn on their southeast sides—big round black sunken blotches.

Then came October 15th, the usual ripening date, but most of the fruit was clearly not ripe. it was still green under the red streaks, very hard, and had its flat, starchy, unripe flavor. Now, in mid-November, it is finally getting ripe. Many of the fruits do have some scab, and a few (not as many as it once seemed) have the sunburn, which will prevent them from keeping well. But overall, there is more than we can eat, as usual, so it’s off to the Free Farm Stand (after our friends and neighbors have been given as many as they can use). And off to bake pies. I photographed the making of an apple pie and plan to put the photos, with recipe, on this blog in a day or two.

I was wondering if you could share specifiics on what you used to treat? I noticed wooly aphids for the first time on our 3 year old 4 in 1 dwarf apple this year. I researched and removed the actual bug with soap and water scrub. After reading your article, I think the pruning spots on the trunk that I thought were just scars may be woolly aphid galls. Any tips appreciated!

Nice website. I have a pest control companie in Brazil and this site its very helpfull!