Recently I saw a disease on fava beans that was unfamiliar to me. It wasn't rust, which makes rusty brownish pustules on leaf undersides. No, these were nasty brown spots on the leaves that merged, became almost black, and destroyed the leaves. My diagnosis is chocolate spot disease, which is caused by the fungus Botrytis fabae. 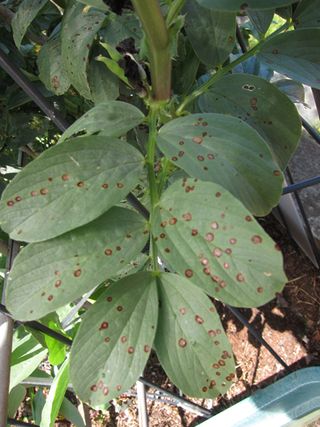 Here is an early stage. Then the spots merge and darken. The leaf below is on its way out. 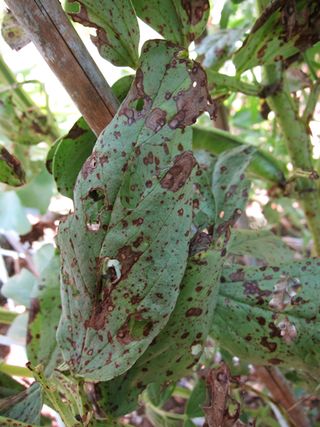 Notice the tear in the middle of the leaf, caused by dead tissue.

I don't have a description of this disease in any book, though one, The Self-Sufficient Gardener, by John Seymour, mentions that "horse beans", the smaller favas farmers feed to livestock, are more susceptible to it than the larger ones humans usually eat. This book is an English publication, and favas are an Old World native bean, so it is probable that they have had some fava diseases longer than we have.

Be that as it may, when I read the Wikipedia article here, I realized this disease could spread fast once it appears. The spores can be carried on or in the seed and can also form resting bodies that lay in wait in the soil until you plant the next fava bean crop. It can also survive "in crop stubble and residue." (That's the cut stems and all the fallen leaf debris you forget to gather up when you take out the diseased plants.)

When the spores germinate, the lesions begin to appear, and within 4-5 days, new spores are released to infect new leaves, stems, or flowers. These spores blow in the wind to new plants or in splashing water. The spores and disease are most active in cool, humid conditions, which is what we've got much of the time here in SF.

So if you have seen this disease on your fava bean plants, take those plants out as soon as you can. Take the whole plant out, roots, fallen leaves, everything. Do not compost it in your garden, though the SF Green Bin is generally OK for diseased plants, since their process is very hot and thorough. Do not save seed from these plants. It should be OK to eat the beans that aren't disfigured by any lesions. This fall, try to avoid planting favas in the same place you used last year if they were infected. Get fresh seed, and look for varieties that have shown resistance. (I will look for some--no idea where to find 'em yet. Send a comment in if you find some, please.)

Another web page says that this disease was first documented in California in 1998. It was found near the coast, no surprise, considering its adaptation to cool, damp weather.

I suppose that farmers who aren't farming organically use fungicides that organic farmers wouldn't use. What would I use? I notice that the label of Serenade fungicide includes both "vegetables" and the plant disease genus "botrytis," so I think I'd give it a try.

Serenade, which is permitted to organic farmers, has as its active ingredient the common soil bacterium Bacillus subtilis. This organism colonizes the plant surface, I've been told, preventing other microorganismns from getting a spore-hold. You spray it on plants weekly. They recommend spraying on a small part of the plant first to see if it will harm the plant. You can apply it up to the day of harvest. (This is not a recommendation, just my thoughts on what I might try and why. As with any pesticide, read the label for yourself before you buy, mix or use it and follow the directions carefully)

However, as with any plant pest, it would be quite unwise to try to control it using a chemical. If you have seen this disease, I repeat: Get those plants out of your garden. Rotate to a new site for favas. Don't save seed. Help me locate some resistant varieties. Then, if you had this disease this year, and have planted fresh seed in a new garden location, next fall, you might try spraying the plants when they are young, before any disease has appeared, to try to prevent an outbreak.

By the way, our favas have not had this disease, I am happy to report, and we've been eating young fava bean pods, when the seeds are still small, roasted in the oven according to a recipe that appeared in the SF Chronicle a few weeks ago. You roll them in olive oil, add salt and pepper, and roast at 450 degrees for about 25 minutes. Sprinkle with more salt, eat pods and all. Serve as a side dish or just before a meal. You may have to pull strings off the pods, but they sure are good!

I cannot diagnose your fava bean leaves without seeing them. In the San Francisco Bay Area speckles can be caused by the fava rust fungus, and I have shown photos of these reddish spots on this blog, or by early or less aggressive cases of chocolate spot. If the speckles are black, they could also be caused by bacterial leaf spot, or something else I don't know about. One kind of fava bean (Petitegreens Fava Leaf) even has leaves, sold for eating as a green, that are said to normally have "unique black spots."
I suggest you contact your local Cooperative Extension (every state has them) and try to get a diagnosis and advice. Look for a Master Gardener program, which is a program of the Cooperative Extension. Master Gardener programs sometimes have Plant Clinics, to which you can bring samples of a plant with a problem and learn more about it.
Having said this, most diseases of plants don't have cures, so the best you can do is learn how to prevent them. Some are mild enough you can keep the plants and eat the crop, others will prevent a good crop from forming. The means of preventing plant diseases are, by using resistant varieties, using seed that isn't infected, avoiding conditions that spread the disease, or removing affected plant parts or entire plants. (If the problem turns out to be chocolate spot, beware of saving seed to grow, as it is my understanding that the disease can be carried in the seed.)

My Fava Beans have fine speckles all over the leaves. Is this a disease and do you know what it is? It just appeared as the weather warmed up here in centralTexas.