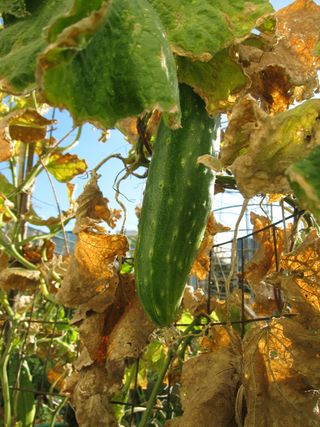 If you have any doubts that this has been a mild fall in San Francisco, consider this: I shot this photo of a plump cucumber in my garden on December 23rd! Although the leaves are dying, a few are still green and the cucs, though small, keep coming. They are also deliciously tender, crisp, and sweet. They received rave reviews in a large Christmas salad we made for a potluck.The plants tell us about the weather as surely as do the thermometor and the rain guage. I think the reasons for this ongoing success are both the mild temperatures and the lack of rain.

How unusual is this late harvest? I've been growing this variety of cucumber, 'Burpless Tasty Green', in the same San Francisco garden for maybe 30 years, and this is the first time they have borne this late. Usually, I pick the last of them by early to mid-November. This year, not only did I pick 3 cucs on December 23rd, but 2 more small ones on December 30th!.

The harvests from a winter garden always seem like special gifts. Hope yours is providing some for you as well--and Happy New Year!

In November, the big news in our home garden was the success of our tree dahlia. It began to bloom at the end of October and still had a few blossoms the weekend after Thanksgiving. It was so tall the flowers were at the level of our second story window. This is such big news because the tree dahlia we had previously, a single-flowered white one, was such a failure.

The white one grew tall all right, and it bloomed too. It's first buds opened just at Thanksgiving and there were plenty of buds. However, at the end of November or the first week of December, there was usually, seems like always, a big wind that lasted 1-3 nights. At the end of it, the flowers and buds were mostly gone and most of the leaves had also broken off. Then all we had was a blackened skeleton until we got tired of looking at it and cut it down. Such a disappointment.

But this one not only begins to bloom a month earlier, but also, when the wind howled three nights in a row last week, the leaves survived! So we had a glorious month of lavender flowers and now the plant is still rather attractive as it soaks up the last bit of sunlight before its annual cutting back. March is the suggested month for cutting back, and we are grateful to have an attractive plant to look at until then. 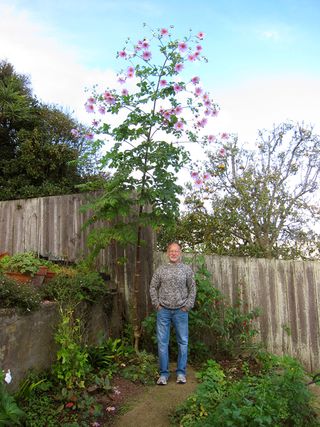 So the moral is that all tree dahlias are not the same. This plant, native to South Mexico and Guatemala to Colombia, is Dahlia imperialis. The species has white, pink, or lavender flowers; single or double. (Because it is a composite flowerhead, "double" means that it has more than one ring of showy ray flowers around the small yellow disk flowers.) Are all white-flowered ones earlier and more delicate in wind? What about double ones? I have no idea. But I'm glad we found a way to enjoy it in our windy garden. 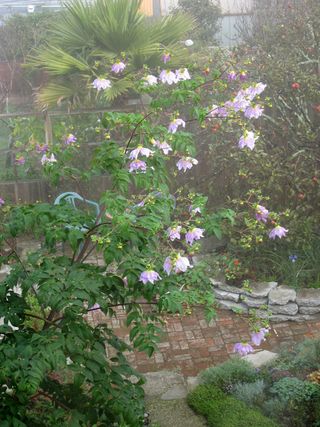 It’s December, with the holidays approaching, but it's not too soon to begin to think about gardening classes for spring. The spring City College Vegetable and Herb classes have been cut, due a serious budget shortfall (more of the squeeze higher education is suffering). However, there are many options for classes.

One class that will last all spring, giving you a chance to follow the season in a garden is the Urban Gardening School that will be co-sponsored by the Garden for the Environment (7th Avenue and Lawton) and 18 Reasons (3674 18th St.) It will take place from January 18th to June 23, on the one Wednesday and one Saturday each month. There will be twelve sessions total. In order to learn more about the class, you can call 18 Reasons at 568-2710, or you read about it and purchase tickets at www.brownpapertickets.com/event/205766.

In addition to this longer class, the Garden for the Environment continues to host short workshops (2-2 1/2 hours). Many of these are free. You can find out their schedule by calling them at ccc-cccc or at their web site, which is www.gardenfortheenvironment.org .

Another place you can find gardening workshops in San Francisco is Sloat Garden Center, at 2700 Sloat Blvd, www.sloatgardens.com.

The Urban Farmer Store hosts classes for professionals on drip irrigation, garden lighting, and related topics, but they also offer some classes for home gardeners, especially in the spring and summer. Right now they are collecting applicants for a pilot SF program to help you install a graywater system. It includes a workshop and a steep discount on material to build your system. You can read about it at www.urbanfarmerstore.com or call the Urban Farmer Store at (415) 661-2204.

Hear of any other classes? Let me know.