This is a plant with a severe case of fava bean rust, or Uromyces viciae-fabae. 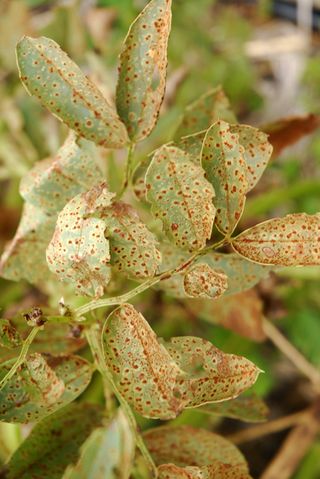 No, the plant is not oxidizing. Rusts are plant diseases that give the impression of rusty spots, but really those are pustules (great word eh?) containing fungal spores. Most of the fungus consists of threads called hypae that are all tangled through the plants, robbing them of nutrients in plant sap. The spores released at the surface are ready to float away and find a new plant to infect. Here are some close up shots of the spore pustules: 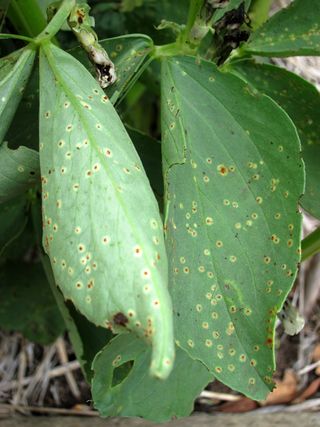 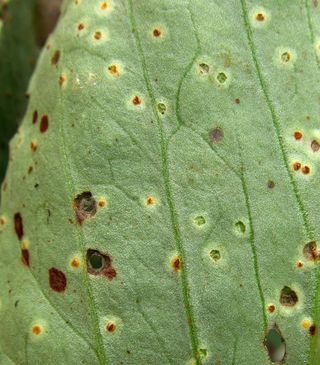 I see the disease fairly often in San Francisco gardens. It does probably reduce production somewhat, but it often occurs later in the season, after most of the crop has formed. Here are some ways to lessen your chance that it will occur or reoccur:

--This disease is encouraged by wet leaves, so try to water favas at the ground level, rather than sprinkling them. Of course we can't prevent rain and misty weather, but the less dampness the better.

--If you see the disease early, with only a bit of damage, you might slow it by removing diseased leave, though of course you don't want to take too many leaves off of the plant.

--If your plants are ripening beans, you will be reluctant to take them out until you harvest, but as soon as you can do so, take th plants out. Do not compost them. In San Francisco, you can put them into a green bin for Recology to compost, since their compost gets very hot and should kill the spores. When you take your plants out, pick up all the fallen and dried leaf debris you can find as well.

--Don't save and replant seed that came from infected fava bean plants.

--Copper sprays, which are approved for organic farmers, may offer some control. However, they will be a lot of trouble for a small planting, and will harm the soil if used repeatedly.

--A two to three year rotation might help, but if your garden is open to breezes from nearby plantings, the spores may be reintroduced.

(See also on this blog posts on chocolate spot disease and the black aphid that infests fava beans.)