We ate the last of the 2011 cucumbers on January 12th. This is a good 2 months later than I usually eat my last cuc. (see photo on post of December 30th, 2011). That's the good side of our continuing mild, sunny, San Francisco winter. But there are downsides too.

One downside is that leafminer flies have continued to fly, mate, and lay occasional eggs on my chard plants. The chard at City College has lost several leaves to their damage. By this time of year, the flies have usually died or are dormant pupae in the soil. It hasnt been so bad that there is no edible chard, as can sometimes happen in summer, but I am surprised to see ANY at this time of year.

Another is that my apple tree had flowers on it in November into December. Not supposed to happen until April! (Ours is a late bloomer.) So that's energy the tree is wasting that it could be spending on making leaves, flowers, and fruit next year.

And then there is miner's lettuce. Or, that is, there is no miner's lettuce. Usually by this time of year I have been making delicious salads from this California native plant that comes up freely in my garden. It is usually beginning to appear by November, and I have enough for the first salad in the first or second week of December. But this year, by mid-January, I have seen only a few very small seedlings

This is what I am usually seeing by this time of year: 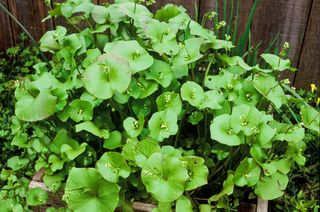 This is a mature miner's lettuce plant, about 15 inches across and a foot tall. The mature leaves are round, with the flower stem coming from the middle of the leaf. The whole plant is delicious and replaces much of the lettuce in my salads from December through mid April. 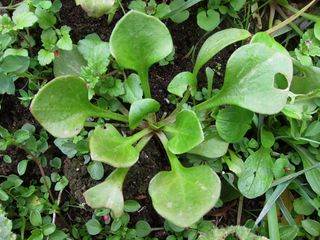 There are only very young miner's lettuce plants like this one. They are about 4 inches across and low to the ground. The young leaves of miner's lettuce (on this plant nibbled a bit by a slug) are spatulate--sort of triangular. The mature, round leaves haven't even begun to show up yet, and it looks like there won't be any for a couple more weeks.

Today on the Prairie Home Companion, on National Public Radio, I heard Garrison Keeler talk about how the lakes in Minnesota were finally frozen solid so the ice fishers could fish safely, and how glad everyone was for the single digit temperatures. Well, I would prefer double digit, myself, and mostly above freezing, but I do have reasons to prefer our normal winter weather.

Tonight it is colder than it has been for several weeks and rain is predicted for next week, so maybe our wait for winter is at an end. But does the weather so far mean a shorter miner's lettuce season? Hope not.

Are any plants or pests acting differently due to the mild winter in your garden?