Some Plants Think it's Spring this November!

Well, we know they aren't thinking, and I guess that's the problem. When San Francisco has some cold weather followed by a period of warm days in mid-Autumn, some plants start growing, or blooming, as they would normally do in February or later. We see a few plum blossoms in fall sometimes, but this year I am seeing many blooming plum trees. I even saw a blooming crabapple tree yesterday, and they normally bloom later in spring than the flowering plums! 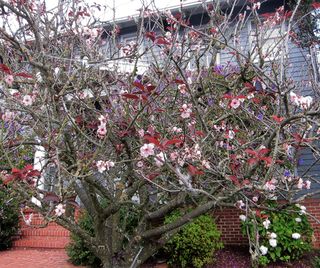 Looks like spring, doesn't it. But look enlarge the image and you see the fake spiderwebs on that tree that remain from Halloween. This shot was taken on November 15, 2012.

In my backyard, I cut a bulbous iris and put it in a vase in early November. This is definitely a February flower, but three plants have bloomed and the rest are all and still growing. 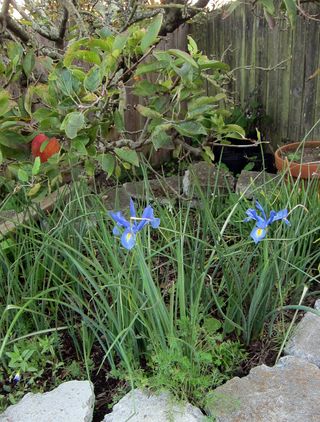 You can see one of the last ripe apples still hanging on our tree. Wrong time of year for iris, for sure.

Another plant reacting badly is the Crocosmia 'Solfaterre'. It had its deep yellow flowers in September, then died back, and I cut it to the ground. Didn't expect to see it again until maybe March. But here it is again, with leaves popping up in November! (The leaves start out green, but turn a smokey brown by midsummer.) 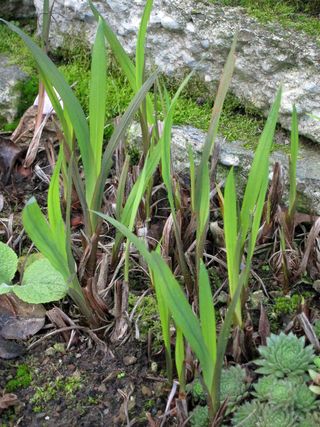 The problem, for these and other early growing and blooming plants is that they are using up all of this energy now, and will probably be forced back into dormancy by colder weather in December and January. Thus they will have less energy to grow and bloom in the spring.

Global warming may change what we can successfully grow here. Some plants that depend on just enough winter chill to rest and regrow, may not thrive if our climate shifts just enough to make them try to bloom twice a year.

The study of the relationship between climate and natural phenomena such as flower bloom time is phenology. We're going to hear a lot more about it as the earth warms!

I was out gardening today, making Black Friday into a green one. A peaceful day. I deadheaded the Cosmos, which are still blooming madly in both front and back yards, then cleaned up apple leaves under our tree, to get rid of apple scab spores. Tomorrow I'll put some composted chicken manure on the wild onion (Allium triquetrum) bed to help them get growing faster. I've been watching the madness at stores on TV and being glad to be home today.

Posted on November 23, 2012 in Gardening and Environment, Gardens and Weather, Phenology | Permalink | Comments (1)

Beautiful flowering on the crabapple! I do worry that an out-of-season flowering will really sap the vitality of the tree or make it more susceptible to infection.

This is the third year that my apples have had a fall flowering. And this year I had two - one just after harvest on both my Gravenstein and Cinnamon Spice - and one just a couple of weeks ago on the Grav. I've been pulling the blossoms off, even though I'm pretty sure the trees couldn't set fruit this time of year.

Fortunately only the apples seem to be affected. But all our trees, including stone fruits, are very slow to lose their leaves, which makes me worry about mildew and fungi. I'll cross my fingers and keep the neem spray ready.