In my last post, I reported having seen some potato plants in San Francisco with what looked like early blight, a disease caused by the fungus Alternaria solani. I remembered from my research for the book Controlling Vegetable Pests, which I wrote in the early '90s, that this disease is not common here in California, but much more so elsewhere in the US. I wrote then that it is "less common in arid regions of the West, although overhead irrigation and frequent heavy dew promote disease in these areas." It showed up the week after we had an unusual June rain, and in a garden that has frequent fog. But the question is: Where did the spores come from?

My first thought was that someone had planted potatoes from the grocery store. These could carry the spores, even without symptoms, or could have had dark lesions with underlying brown or blacky corky rot from spores that grew on their surfaces. However, the gardener assured me that these were purchased at a nursery as certified disease-free.

So the spores must have blown in from a nearby garden or were carried in the rain. Then they landed on potato leaves that had some injury, at a time when the temperature and amount of hunidity were right for them to start growing, and the rest is history. The ideal temperature for early blight spore growth is 75-80 degrees F, but the symptoms develop fastest at 70 degrees.

This disease can also infect tomato, and, occasionally, eggplant or pepper. Wild relatives of these plants are also susceptible. On tomato, the leafe symptoms, the bull's eye spots, are the same as on potato, and there may be sunken lesions on older stems. In additon, there may be excessive blossom drop (common here anyway due to cold nights) and leathery, sunken, dark brown lesions on the stem end of the fruits.

If this disease shows up in your garden, take the plants out of the garden. (In San Francisco, they can go in the Green Bin, since the municipal composting system will heat up enough to kill the spores.) If potato plants have formed tubers, eat them up soon, as they may decay in storage. Don't store them where you will kep other, healthy, potatoes later.

The spores can germinate in plant material from infected plants as long as it has not completely decayed, so pick up every bit of the plant and dig up most of its root. Do not save seeds from tomatoes that ripened on infected plants, as the spores can hide in the seeds.

Remove any solanum weeds that are growing in your garden, as they can harbor the disease. (They have flowers similar to those of tomato, but usually with white or pale lavender petals, and have clusters of small, inedible berries that turn black when ripe.)

Plan not to grow tomatoes or potatoes in the place where infected plants grew for two to three years.

When you do plant potatoes or tomatoes, provide your plants with adequate water and fertilizer and avoid getting water on the leaves of tomato'potato family plants. Start examining them when they are about a foot tall to be sure they do not have symptoms. Prevention is more successful than cure when it comes to plant diseases, but if you have had the disease, or if you see the first lesions it is causing, you might try the fungicide Serenade, which is based on a soil bacterium. Follow directions on the label, including repeated sprayings as it directs. (If you are spraying after seeing lesions on a leaf or two, pick off those first infected leaves before you spray.)

May early blight of tomato or potato not darken your door, or the leaves of any plants you are growing to produce food!

When I saw these symptoms on some potatoes in a local garden, I thought they looked like early blght of potato and tomato, a disease caused by the fungus Alternaria solani. But I thought it unlikely, because this is not a common disease in our region. I tried to return to get good photos of the diseased plants, but when I arrived, the plants had been pulled, so my photos show leaves I selected to show the symptoms. 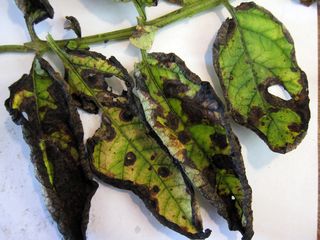 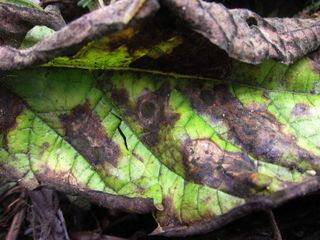 The most diagnostic symptom is those dark brown lesions on the leaves with concentric rings visible in them. Those are from repeated growth of the fungus and release of spores. Symptoms are similar on tomato. Also susceptible are a number of wild potato/tomato relatives and other members of this plant family.

Eventually, the brown spots coalesce so that the entire leaves become brown and die. 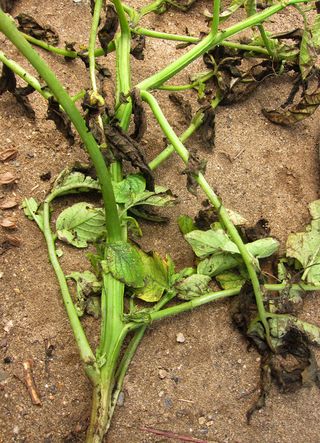 (This is an entirely different disease from Late Blight, which is Phytophthora infestans. Search this blog for more on that disease, with photos of its symptoms.)

Potato/tomato early blight is spread by spores, as are most fungi. I sent a sample of the diseased leaves, through the Cooperative Extension, to Brenna Aegarter, a UC potato expert in Stockton to ask for help identifying the disease. She lifted spores from the leaves with Scotch tape and put them under the microscope. Here is what she saw, followed by her reply: 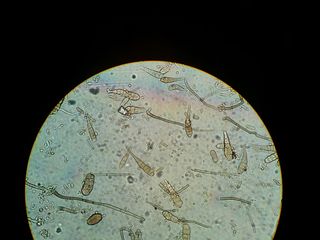 "There is clearly Ulocladium and Cladosporium (which are common “molds” on senescing/decaying leaves) as well as some Alternaria spores. However, the challenge is that there are two types of Alternarias in the world. One type is a common mold and would often be found on dying leaves. The other type are pathogens of plants and infect tissue that is living (and includes Alternaria solani cause of early blight). The ones that are not pathogens have short “beaks” while the pathogenic ones have long beaks (the narrow section of the spore that extends out).  Under the microscope I saw Alternaria spores with beaks, but the beaks were not so long as to entirely convince me that they are spores of Alternaria solani. But I have sent my photo to a colleague to see what he thinks. Stay tuned!"

Later, I heard from her to the effect that her colleague had confirmed that the beaked spores are Alternaria solani. If you look at the slide, you will see the ones with a long point on one end. There are the other, decay bacteria spores also, and I think the large, long objects are probably plant hairs.

I will, in my next post, explain this disease and what to do about it.