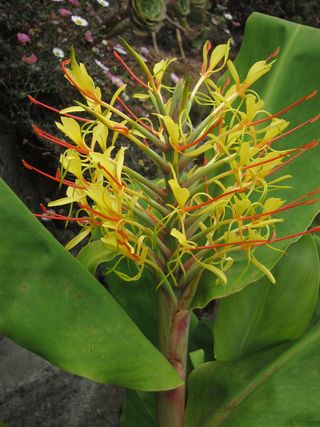 I continue my entries on flowers that bloom in August/September/October in my San Francisco garden. The garden is cool in summer, often foggy, damp, and almost completely in shade in late autumn through late winter. Many common late summer into fall flowers get gray mold or a powdery mildew in these conditions. Here's another that does not.
The plant piectured above was given to me as "ginger". It's Hedychium gardnerianum or Kahiri ginger, a plant native to the Himalayas. (Must be the lower parts of the Himalayas, where winter isn't so cold, but high enough that it doesn't require high heat and can tolerate cool summer nights.) I love having its big, bright, interesting, highly fragrant flowers in my garden at the end of the summer season.

Note that this isn't culinary ginger, not the one that's edible, only an ornamental plant with "ginger" in the common name. 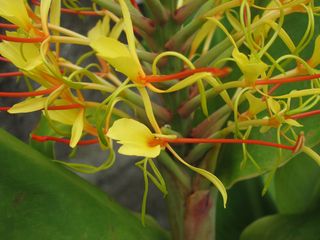 The part of the garden it's in is in shade, albeit open shade, from August until Aprill. But the plant blooms in late August and into September anyway, and never has a touch of botrytis or other fungus disease.

Here is how the plants look when they aren't blooming. They are 3-4 feet tall. 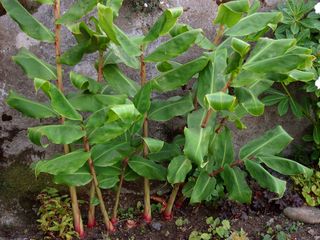 In a warmer place, or if they had the right pollinator (not sure which or if it's both)  the flowers would be followed by orange fruits, but they haven't here. I have read that the plant is an invasive weed in Hawaii, where it does form seed, so it's just as well that it doesn't make seed here.

In any case, after they bloom, I cut off the spent flowers. By the next spring, the leafy stems that bloomed start to look kind of ragged, and, if the plant is healthy, about the same number of new shoots begin to come up at their bases. As soon as the new shoots are tall enough to be attractive, I cut the old ones to the ground, or actually, they sort of snap off just at soil level.

For the first 2-3 years I had the plants, they didn't bloom and made few new shoots. Whether they were just young, or needed better care, I can't say. After that time, I started fertilizing the plants in spring and summer, and giving them more water, and then they started blooming and growing new blooming stems each year.

My San Francisco garden is often foggy, cool, and damp in the summer, too much so for a number of late summer-into-fall kinds of flowers. I'm starting a series of posts about some plants that bloom in my garden in this season without succumbing to botrytis (gray mold) or other diseases encouraged by the cool, damp microclimate.

This first flower is Eucomis, also known as pineapple lily. I like it because it looks so dramatic, but it is easy to grow. I have grown it in containers for many years. It blooms without fail in mid-August and lasts several weeks. The leaves are low to the ground; the flower stem is over a foot tall. 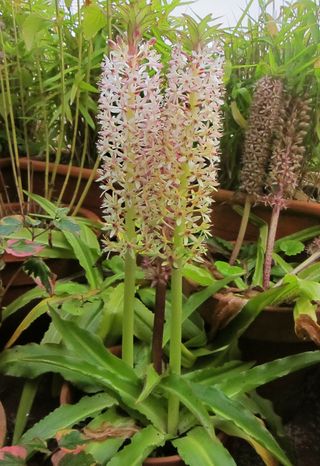 This plant is Eucomis comosa, which has white or pink flowers. 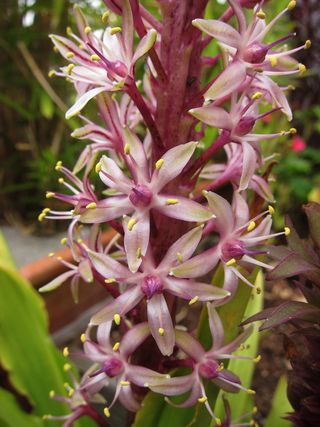 Here's a close up of one that has pinker flowers. You can see they are like miniature lilies. It is indeed a lily relative, but not related to pineapple. That name comes from the little tuft of leaves at the top of the flower stem, like the one above a pineapple.

Eucomis grows from bulbs, which you may find at a local nursery in the spring, or may have to mail order from a bulb specialty company. It can be grown in the ground if you like, or you can plant one or more bulbs in a container. In the ground or in a container, plant so the neck of the bulb shows at the surface.The plants are hardy to 10 degrees F.

Though the porch on which they are growing goes into shade while the Eucomis is still in bloom, becoming even more cool and damp, it never becomes infected with botrytis or any other disease. After it blooms, the flower stems and leaves pull out of the bulb easily and can be composted. 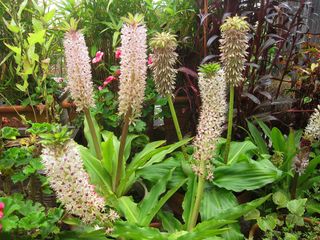 Here is a group of eucomis plants in several containers. The ones in the back right are Eucomis bicolor, a similar species that has pale green flowers with purple edges. This species has the same growing needs as E. comosa.