I've been writing about flowers that bloom in my garden in late summer and fall. This time of year is always a challenge, because the summer is dry and so many mediterranean and California native plants bloom earlier in the year. I have the further problem that my garden is in a foggy and cool part of the city, and the backyard goes into shade in fall and winter. This results in outbreaks of powdery mildew diseases and gray mold. So I am writing about plants that resist these diseases.

The photo below is of pineapple sage, Salvia elegans, which provides reliable color, from September into November. The photo was taken on October 15th. November 15th, it was still in bloom. The spot where it is planted is in sun from April until September, then in open shade, so it gets the sun it needs to prepare to bloom. 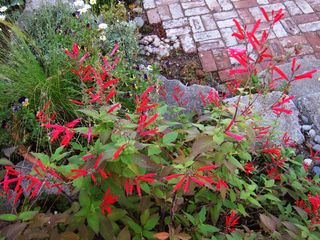 This plant attracts hummingbirds and offers a whiff of pineapple to gardeners who brush against it. The edible flowers are attractive in salads, especially in a fruit salad. The leaves have such a tantilizing scent, but unfortunately, do not hold the scent when they have been cooked.

In winter, pneapple sage loses most of its leaves. In spring, I cut back any bare stems, and new, leafy ones grow to replace them.

Another late-blooming flower with tubular red flowers is the California fuchsia. (It used to be called Zauschneria californica, but has had a botanical name change, so it is now to be called Epilobium canuum.) I grow it in a place that gets sun all year, but it could handle winter shade, since it is mostly dormant in winter. You wouldn't want it too near to a pineapple sage plant, in any case, since one small, red tubular flower in a small space is enough.

California fuchsia blooms from July onward into autumn. This year, following our spectacularly mild November, some parts of the plant are still blooming at the end of December. It has no scent, however it does share with pineapple sage that it attracts hummingbirds. It has no scent. The other morning when I went to pick up the paper, a hummer was taking its breakfast in the California fuchsias.

The main drawback I have found to California fuchsia is that the plant is very brittle. If a cat fight happens in it, or you have to reach through it to get to other plants, the meter reader has to push it aside to read a metor, damage will occur. Pieces will break off and have to be discarded. So be careful where you put it.

After California fuchsia blooms, it looks pretty ratty and you will want to cut it back. Maybe the first year just cut back partway, but  I cut my established plants to near the ground and it comes back fine. 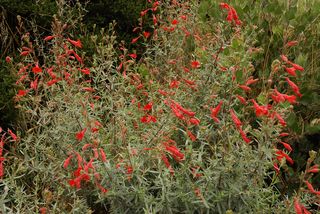 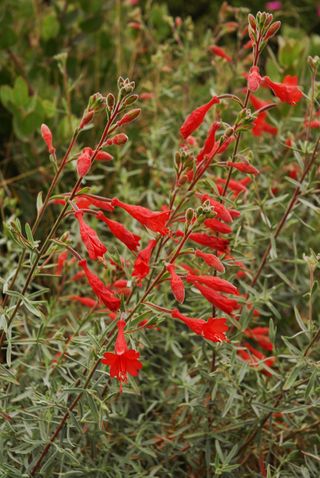 For some bright yellow in late summer and autumn, grow goldenrod. There is a native species, Solidago californica, which I think is the one in the photo. These plants are about 3 feet tall and were covered with bees--honeybees, bumble bees, large and small native bees--they were all having a feast. 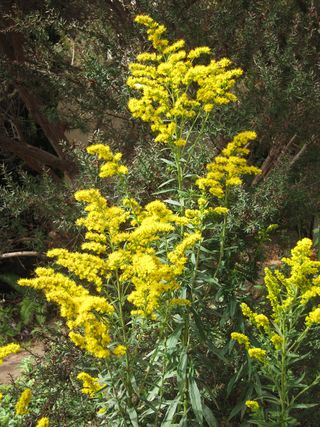 Here is a big bee, probably native, not a bumblebee. 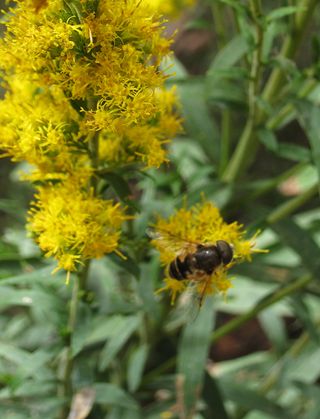 This one was a wee little bee, probably another native. After goldenrod blooms, cut it back partway. It is a semi-evergreen perennial. And, by the way, it is falsely accused of causing hayfever. Apparently it is the ragweed that blooms at the same time as Eastern goldenrod species that is the culprit. 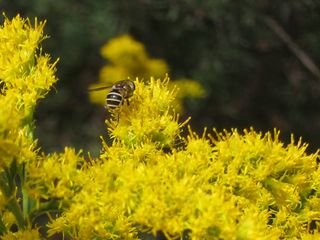 Coming up: Some flowers for winter color.