Addendum to Herb Society Lecture on Unusual Herbs to Grow

These are some extra notes about the herbs I spoke about in my talk on unusual herbs at the Annual Conference of the Herb Society of America on June 21, 2014, including a list of mail order sources for seeds and/or plants. If you want more info about these herbs, send me questions as comments. Or, if you'd like a repeat of the talk I gave to the Herb Society, send me a line about that (see Contact).

This plant is covered thoroughly on  other pages of this blog. Do a search for other posts about it.

These are the three of the new, patented Herbalea basils I was able to purchase locally. There are up to 15 Herbalea varieties. I have nothing to add about them today, but will be blogging about them more as I continue to grow and cook with them. 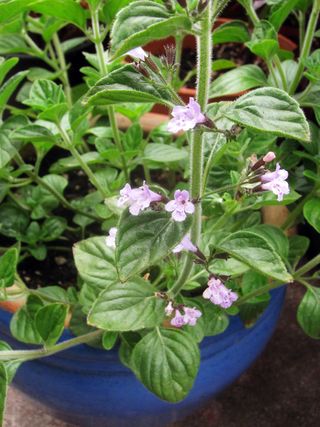 This mint family herb has a flavor of mint and oregano together. It is popular in Tuscan cuisine, especially with mushrooms and artichoke.

Has, in the past, been classified as a thyme, melissa, clinopodium, and satureja. Has also been called Calamintha glandulosa.

There are two other common Calamintha species that you may encounter--and that are not the herb  nepitella! They are Calamintha sylvatica and Calamintha officinalis.

Brush the mushrooms or wipe them with a damp towel to clean. Cut off and discard the dry ends of the stalks. Slice mushrooms thinly. Slice zucchini into very thin rounds.

Heat olive oil in a 12 inch sauté pan over medium heat. Add garlic and cook until it takes on a pale gold tone. Do not brown garlic, or it will be bitter. Increase to medium high and add mushrooms. Sauté, tossing mushrooms until they have taken up the oil. Don't be tempted to add more oil. Add 1/2 teaspoons of salt and continue cooking, tossing occasionally.

As the mushrooms cook, they will exude liquid. Cook until the liquid is almost completely evaporated, which will take 5-8 minutes.

Add zucchini and the other 1/2 teaspoon of salt. Cook until tender. Add a few twists of freshly ground black pepper and the herbs. Toss lightly. Remove from heat. Test for seasoning. Serve.

Eat this hot as a side dish, or cold as a crostini or antipasto.

Entire plant has a lemony flavor. It is grown to make tea and for its attractive, blue, edible flowers.

Dracocephalus parviflorum, American dragonhead, is native to Alaska and is treasured there as a native plant whose oil-rich seeds provide a food for birds. Has a slight minty smell to crushed leaves, probably hasn't been explored as an herb. 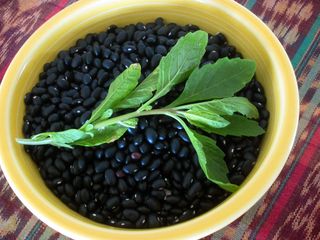 A strong-scented herb native to Mexico and used in Mexican cuisine with beans and in sauces.

Until quite recently, ths plant was classified as Chenopodium abrosioides, and is still considered quite similar to the chenopodiumns, although no chenopodium I know of has that strong a scent.

fr. Greek dysphanis=obscure, referring to the inconspicuous flowers, ambrosioides fr. Latin, ambrosia, referring to some similarity a botanist saw to plants in the genus Ambrosia (ragweed)

Recipe Adapted From The Complete Book of Mexican Cooking, by Elizabeth Lambert Ortiz

Wash the beans and place in a saucepan without soaking, with enough cold water to cover, 1 of the chopped onions, one of the garlic cloves, the epazote (or bay leaf) and the chiles. [If you can't find fresh serranos, she suggeste dried pequin chiles, crumbled. You could also try a bit of fresh Jalapeno, or you could reduce, or omit chiles] Cover, bring to a boil, reduce heat; then simmer gently, adding more boiling water as it boils away. When the beans begin to wrinkle, add one tablespoon of the lard or oil. Continue cooking until the beans are soft. At this point, stir in enough salt to taste. Cook another 30 minutes over the same heat, but do not add water, as there should not be a great deal of liquid when the beans are done. Heat the remaining lard [or oil] in a skillet and sauté the remaining onion and garlic until limp. Add the tomato and cook for about two minutes over medium heat; add three tablespoons of beans, bit by bit, with some of the liquid from the pot, and mash, until you have a smooth, fairly heavy paste. Return this to the bean pot and stir into the beans over low heat to thicken the remaining liquid. .

[The epazote adds a very subtle flavor, not at all what you expect from the scent of the raw plant. I served this with a little bottled green sauce splashed on top, which made it even better. )

A celery family herb/vegetable that grows best in shade.

I think this means that oil tubes, present in plants of this family, are hidden in some way. There are typical oil-tube ridges on the seeds (really fruits), so I'm not sure what is hidden.

Native to the Eastern half of the US and Canada and known as honewort. Similar in appearance to C. japonica and also edible. Grows in shady places. Seed available from Prairie Moon Nursery (prairiemoon.com). If you are seeking it in the wild, check first to learn if it is a listed endangered species your state.  Also be aware that some wild members of the celery plant family are deadly poisons--so make sure you have the identified the plant correctly before you eat it. 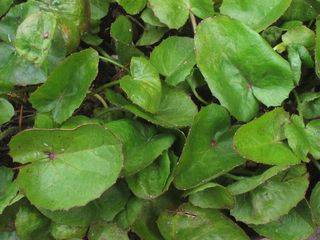 This celery family herb is used in Asian cooking, including blended into a sweetened drink.

This plant was once classified as Hydrocotyle asiatica.

There has been much discussion about whether the Centella growing in the Western Hemisphere (US and Canada) are the same species as the one growing in Asia. The North American plants have been called Centella erecta, but are often now considered a variety of Centella asiatica.

centella is a diminutive of cent, therefore a "little coin"

Several Hydrocotyle species are found in both Asia and some parts of the U.S. They differ from Centella in having a leaf stem (petiole) in the middle of a round leaf (peltate) rather than at the edge of a shovel or kidney shaped leaf. The Hydrocotyles are, like Centella, fond of wet places and are edible.

Be aware if you plan to collect any of these plants in the wild that they can carry bacteria if growing in unclean water and can also take up toxins that might be in the water.

Recipe From Encyclopedia of Asian Food By Charmaine Solomon

Wash well and strip leaves from stems. Shred finely with a sharp knife, combine with other ingredients and serve immediately. The flavor is slightly sour, slightly bitter. Some people prefer this salad to be lightly cooked, if so bring a tablespoon of water and 1/2 teaspoon salt to the boil in a wok or pan, add all iingredients and toss over heat briefly, stopping before leaves lose their green color. 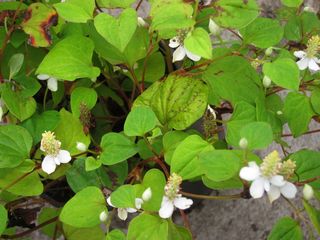 The plant has a strong scent and flavor that reminds some of fish. It is used in SE Asian cooking.

This plant is in the family Saureraceae, whose name derives from the root saur, meaning lizard.

Another genus in this family has a long, drooping, lizard tail-like flower head, and the name floats around the family.

Houttuynia is named after the Dutch botanist Martin Houttyn, who lived 1720-1798. Cordata refers to the heart-shaped leaves.

The plant is sometimes called "chameleon plant" which is an echo of the name of a popular ornamental cultivar. In fact, non Asians might never have seen the original, green-leaved species that is used as an herb.

Anemopsis californica is a plant in a different genus in the Saureraceae that is native to California and nearby southwestern states. It was called yerba mansa by native Californians, who used it medicinally. It is now sold by native plant nurseries as an ornamental that grows to 3 feet tall, with large gray-green leaves and large spikes of tiny flowers, each with its white bract, and several white bracts at the base of the spike. It can be grown in wet places and is cold hardy.

Has a flavor that Westerners consider close to that of cilantro, but is not used as a substitute in Asian cooking, but as an herb with a distinctive flavor of its own.

All Persicarias used to be Polygonums.

Persicaria is from the Latin word persicum, meaning peach. Someone thought the leaves resembled those of a peach tree.

You will come across other Persicarias, both domestic and weedy. The weedy ones are often given the common name of knotweed, as in common knotweed or swamp knotweed. The ornamental species and varieties are often grown for their colorful leaves, sometimes purple, sometimes variegated. A very common species, grown in gardens for many years, is P. capitata, a ground  cover plant with small round heads of pink flowers. I did not investigate edibility or flavor of other species of Persicaria.

Most marigolds, plants in the daisy family, have an unpleasant, pungent flavor, the leaves of this one are sweet and similar to tarragon in flavor.

Tagetes refers to the Roman god Tages, an adopted son or grandson of Jupiter, who was originally the Etruscan god of prophecy. Lucida is from the Latin root meaning clear or bright, referring to the bright flowers. Tagetes lucida is sometimes sold as "Mexican mint marigold." The common name marigold was given to plants in the Western Hemisphere genus Tagetes by Euorpeans. They chose this name because Tagetes flowers  reminded them of the European flower Calendula. As is frequently the case with medieval European plant names, the word marigold is a Catholic reference, short for Mary's Gold--a flower of the Virgin Mary.

This is not the marigold commonly listed as having edible flowers. That is Tagetes tenuifolia, or signet marigold. The flowers of that species are milder in flavor than those of most marigolds, but the plant doesn't have the sweet flavor of Tagetes lucida.

No Mailorder Source Located Yet

Richters sells plants of both green and tricolor {'Chameleon') varieties

Richters sells plants including "Colosso' plants, which are shipped April-Nov and are 12.00 each!

Richters sells seeds of the species and plants of Tarragold--a trademarked variety.

Web Addresses of Sources Listed Above:

Is it possible for you to share your notes for your lecture at the Herb Society on June 21, 2014 about uUnusual herbs to Grow. I am fascinated about the unusual varieties that you have chosen. Thanks.