At the end of May, we took a trip to Mendocino, where we visited the Coast Botanical Garden. It is always a treat, in part because the plantings are lovely, and in part because there are such a variety of environments. At the front, there is a perennial garden, then cactus and succulents, trees and shrubs, water garden, woodland garden, and if you keep on walking, you enter wild land that eventually leads to a tall grassy bluff over the ocean. Below there are rocks and waves. Above, native bunch grasses and wildflowers. One year there was a sea otter in the rocks below us. This year, no such luck, but I got this shot of the California native seathrift (Armeria maritima) at the very edge of the bluff. 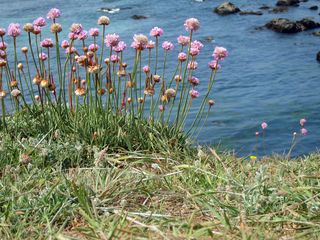 I knew that this species was from near the ocean, from the "maritima" in the specific epithet, but I had never pictured exactly what that could mean-right over the water as it is.

It was also fun to see all the native succulents, the Duddleyas, that grew down the rocky slopes to the water, but not possible to climb down and photograph them.

In the perennial plantings of the garden, there are both native and non-native plants. And of the natives, both species and cultivated varieties of wild species. This wonderful California poppy variety is called 'Champagne and Roses'. 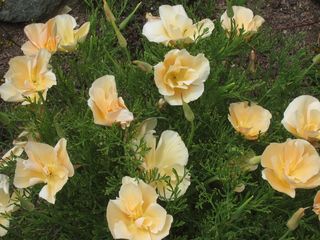 And right in the front, in the window boxes of the cafe, there was this wonderful planting of bidens. Both cultivars have larger flowers than the species, and the rusty-orange one has purple leaves. I wanted it, but the nursery manager said she was not only out of it, but so were all of her suppliers! Darn! 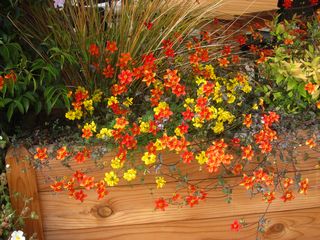 I was so busy taking photos that I forgot to ask the name of the cultivar, but I am hoping to find it again. Any reader happen to know what it is called?

Next post I will show some photos of plants in the town of Mendocino and the coastal trail around the city. The town is full of common and rare flowers and surrounded by a skirt of wild flowers.

Mendocino is a great place for gardening and I think you just convinced me to go there again. It sounds weird by I love to go on gardening vacations where I visit a friend and do nothing but work on their garden. It's a great break from the more heavy duty landscaping I do at work. Thanks for sharing this inspiring images!