Some Resources for Waterwise Gardeners

This is not meant to be a complete list, by any means, but here are a few publications and links that will be useful if you are selecting plants for a waterwise garden.

WUCOLS stands for Water Use Classification of Landscape Plants. This project, sponsored by UCDavis, California Dept of Water Resources, California Center for Urban Horticulture, lets you find out the water needs of over 3,500 landscape plants in six different regions of California. The most recent version WUCOLS IV,can be accessed at the following address:

http://ucanr.edu/sites/WUCOLS/   Click on "Plant Search" Or you can use this link: WUCOLS IV

For information on growing California Native Plants, check out the Las Pilitas web site, laspilitas.com, or use this link: Las Pilitas Nursery.

Here are links to two articles on the subject of watering trees during a drought that were recently in the San Francisco Chronicle:

Trees Out on A Limb

Watering Trees in A Drought

Finally, here is a short list of books that you will find useful as you seek ideas and plants for a waterwise garden:

New Sunset Western Garden Book. I think the most recent is 2012, and it does have all color photos, which are helpful, but the text of couple of editions right before this one were a little more thorough.

Plant Life in the World's Mediterranean Climates, Peter B. Dallman, University of California Press, 1998. Maps and charts show how the 5 mediterranean regions are similar and, importantly, how they differ, then explains the habitats to which many of our favorite plants are adapted.

The Random House Book of Indoor and Greenhouse Plants, Roger Phillips & Martyn Rix, Volumes 1 & 2, Random House,1997. Despite the name, thiese two volumes cover mostly mediterranean and other subtropical plants that we can grow outside. The photos and text about the plants in their native habitats are very useful.

About the Bidens Hawaiian Flare Series 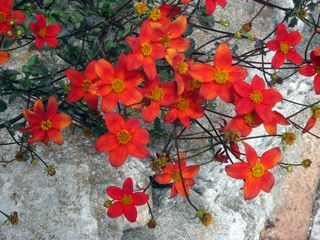 A number of readers wrote in to ask where they could purchase the Bindens varieties I wrote about in my August column. The one shown above is Bidens Hawaiian Flare series 'Red Drop'. It and other Hawaiian Flare Bidens varieties have been available to wholesalers for at least two years, but are not often to be found in local nurseries. When I saw this variety last summer at the Mendocino Botanical Garden, I asked them about it. They said their supplier was out. I neglected to find out its name, and without a name, I didn't have a way to search for it.

Then the manager of Flowercraft Nursery, in San Franciso, found it in a truck arriving from a wholesaler, thought it might be what I wanted and plucked some out for me. With the correct name, I could write about it, and with the proper name, we can ask local retailers to carry it.

A little research turns up the following information:Bidens Hawaiian Flare series was bred by Florsaika, a Japanese company see florsaika.com/bidens-hawaiian-flare/). It is available only from cuttings, and these are handled exclusively by Florexpo, a company based in Costa Rica that sells unrooted cuttings to brokers worldwide, but mostly to North America, Europe, and Japan. (See florexpo.net)  On the websites of both of these companies, you can see videos that explain their businesses.

From Florexpo, the cuttings go to brokers. Then a wholesale nursery buys them from a broker and grows the  plants up to the size retailers want. Finally, the wholesaler sends out plants, in some combination of what the retailer asks them to send and what they think a retailer will want.

Before I list a plant, I usually contact some local nurseries and make sure they are carrying it, so they won't be caught without it. But in this case, I think the plants are sleepers--great choices that have not become widely available. You might find them available locally, but if not, politely ask your local nursery for the plants by name. Tell them you'd like to have some Bidens Hawaiian Flare Series plants, now, if they can get any, next spring if they can't get them now. Then they will ask their wholesalers about the plants, and either get ones now or see if they can get a wholesaler to grow some for spring. (The nurseries that are most likely to carry these varieties are ones that buy plants from wholesalers, rather than ones that usually grow their own plants from their own seed or cuttings, since these plants have to be grown from purchased cuttings.)

Here is how Hawaiian Flare 'Red Drop' looks in my garden now (growing with blue annual Convolvulus tricolor and some chartreuse green nicotiana). 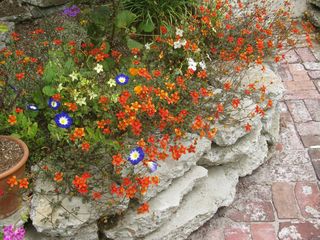 The plants growing with them are Nicotiana in chartreuse and white and annual Convolvulus tricolor (blue).

Here is another Bidens Hawaiian Flare, 'Red Star', that I found in a nursery, not realizing at the time that it was in the same series as 'Red Drop'. 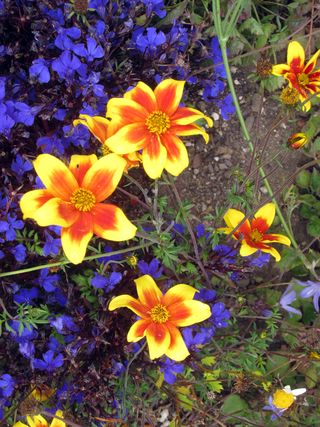 It is growing here with some blue edging lobelia.

The advantages of the new Bidens varieties are, besides different colors and larger flowers than were otherwise available, that their more open, taller form allows them to drape and to mix with other plants in a border, and their height makes them more attractive to native bees and other beneficial insects.

Finally, here is a close up of the Bidens that used to be the main one available. The plant shown here is fairly young, so only has a few flowers, but when it grows larger, this plant will be a low mat covered with the one inch yellow flowers. 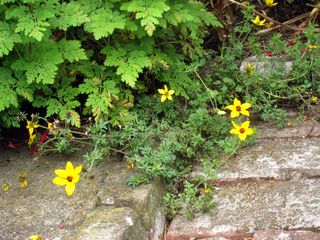 It is growing under a taller feverfew plant that has similar, but larger, leaves.