The wild onion in the following recipes is shown below. The first image shows the plant, which grows from late fall to spring, usually as a weed in gardens and wild urban places in the San Francisco Bay Area. It could be made with ordinary green onions. If you live in the Eastern US, you might have access to a plant that is native there called ramps, which is similar and could be used instead. (Ramps don't grow in the West.) 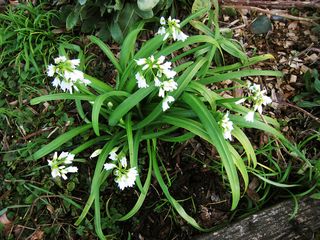 The second image shows a close up of leaves and flowers, so you can see the ridge, or keel, on the underside of the leaves and also that the flower stem is triangular in cross section. Note that there is a green line down each of the petals. 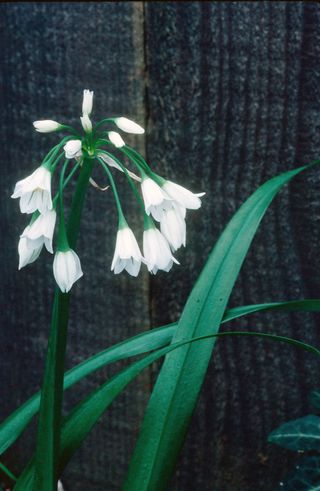 Fish in Seafood Sauce (Adapted from the book From Sea and Stream, by Lou Seibert Pappas, 101 Productions, 1986) (The wild onion referred to in this recipe is Allium triquetrum, a Mediterranean escaped species that is a weed in California gardens. Please only eat weeds if you are sure of your identification skills.)

3-4 ounces of small peeled shrimp or other seafood

1 to 1 1/3 pounds rock fish like snapper (or swai, which is also called white roughy and basa)

Set oven for 400° F. Spray-oil or grease an approximately 9x12 oven proof casserole or pan. Arrange pieces of fish in the casserole in a single layer. In a small skillet, saute mushrooms and onion in butter or margarine until soft. In a small saucepan, put the milk, then add to it the cornstarch, salt, and nutmeg. Cook the milk mixture, stirring often, until the sauce thickens. Stir in the wine, mushroom/onion mixture, and shrimp or other seafood. Pour the sauce over the fish. Bake, uncovered, for 15-25 minutes, until fish separates easily with a fork. Good served over rotelli pasta. Makes 3-4 servings.

Some photos follow, showing preparation and serving of the dish:

Cutting up the wild onions and the mushrooms. The fish is in the casserole. 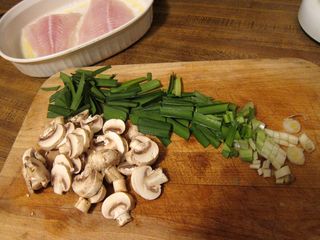 The casserole ready to bake. 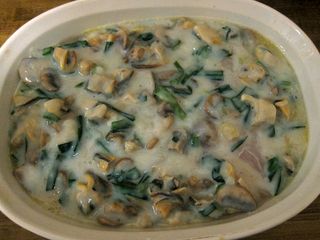 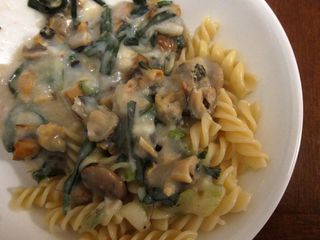 The recipe calls for shrimp, but in this case the dish has been made with cut-up cooked mussels, purchased frozen. 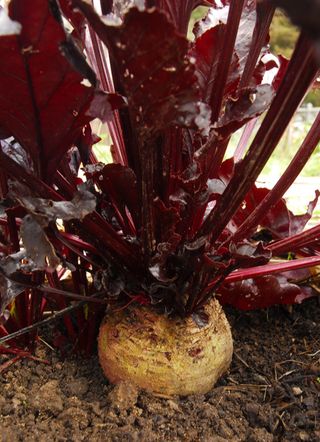 salt and black pepper if desired

leaves and flowers of wild Mediterranean onion for garnish

Put the grated beets in a large salad bowl. In a small jar with a lid, combine the rest of the ingredients. Put the lid on and shake vigorously to mix ingredients. Pour the dressing over the beets and toss with two spoons until well coated. Adjust flavor if needed. The salad is now ready to eat, but it's even better if marinated in the refrigerator for at least an hour. Keeps in the refrigerator for several days. 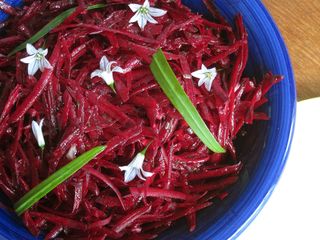