In this month's SF Chronicle column (which will appear December 13, 2015) I reviewed a book called Cultivating Chaos: How to Enrich Landscapes with Self-seeding Plants. Every vegetable gardener knows that some vegetables self-seed in gardens. The mustard or arugula we didn't pull out before they set seed, the last beans, hiding in the foliage until they ripen and drop, the parsnip we let bloom to attract beneficial insects. These all will result in little surprises in the following year. With our long California seasons, with plenty of time for seeds to ripen, we probably see more volunteer crop seedlings than would gardeners in short-summer climates. 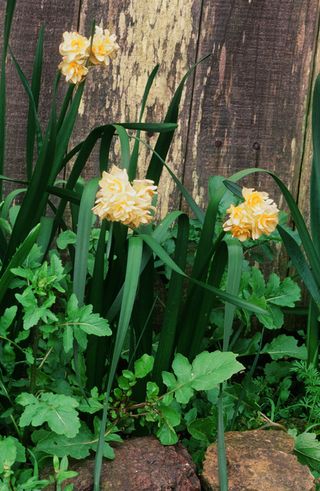 (Self-seeded arugula with Daffodils, in February. A free salad green that decorates the garden until you eat it up.)

What do we do about it? Depending on our needs, we may let the volunteer grow and eat it. Or, if it is in the way, we may move it, or if that isn't possible, because it will not transplant well, or if we have too many seedlings of it, we pull it out. No problem. We usually kind of like it that nature has given us something we might eat without having to sow the seed. So it is a short leap to enjoying volunteers in our flower gardens.

The Cultivating Chaosbook is a celebration of ornamental plants that grow from naturally dropped seed, as opposed to seed we replant each year. It will be an inspiration to those who want to have a truly beautiful ornamental garden that embraces some of these plants. It includes many photos of handsome gardens or parts of gardens using self-sowing plants, tips on using them well in gardens, and a plant encyclopedia to illustrate and discuss the merits of a number of plant candidates. 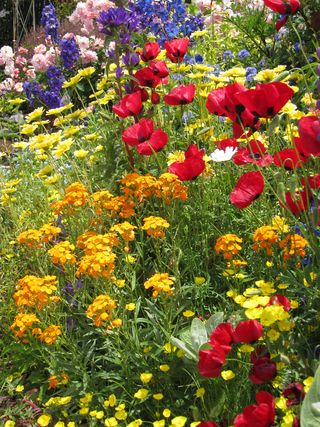 (I shot this image at Annie's Annuals. This nursery, in Richmond, CA, is a good source of plants that will reseed, such as these red poppies. They are at anniesannuals.com.)

Here I must acknowledge that some gardeners are afraid of self-seeding plants. It has been a fashion recently to plant home gardens that are like the gardens of a commercial establishment in that the plants have been chosen to grow slowly, need little pruning, and stay put. A thick mulch is applied to keep weeds down, and any wayward seeds usually perish in the mulch. It's called low-maintenance gardening, and I suppose it is, but oh, how I would miss the serendipity of an old-fashioned garden flower bed.

The authors of Cultivating Chaos understand that one does not want a garden to be 100% chaos. They say the trick to creating a pleasing garden design with self-seeding flowers is to contrast their relative chaos with "clearly defined architectural forms and areas of quiet that are the result of traditional garden planning."

Yes! I knew this when I decided what I wanted in my own garden. It needed enough structure created by hardscape that some of the planted areas could be more random (or chaotic), with only an occasional formal row of some plant to add a modicum of order. Broken concrete and used bricks create low retaining walls and a patio, with some paths made of concrete pavers or decomposed granite. Now I have to decide how much self-sowing to allow. I have learned, as did the authors of Cultivating Chaos, that much of what goes on to manage the potential chaos is removal of unwanted seedlings.

Removing self-seeding plants is weeding, really, but what you remove is often, and, as the process continues, more often, a flower rather than a true weed. (If there is bare earth, and even if there is a mulch, really, there will be weeds. So one might as well be weeding out flower seedlilngs as weedy plants with no ornamental value.)

I must say here that my book, Wildly Successful Plants: Northern California, features a number of self-seeding ornamentals that thrive in our regional microclimates. I grow many of these in my own garden--including columbine, blue nigella Kenilworth ivy, feverfew, linaria, cineraria, nasturtium, Johnny-jump-up, and California poppy. I do buy plants and seed, but I depend on self-sowers to fill in between them and bloom each year without having to be purchased or sown.(And I also have volunteer parsley, chervil, arugula, potatoes, an occasional parsnip.) 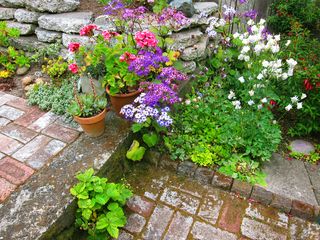 (A self-seeded Alpine strawberry, golden feverfew, purple cineraria, and columbine fill in this corner of my garden.)

And, as I said earlier, many gardeners are afraid of self-sowers, so they are afraid of my book. A sad fact, since they are losing access to so much useful information, including information on which of the featured plants are deer tolerant, snail tolerant, drought tolerant (most), or attractive to humming birds.

The book Cultivating Chaos skips lightly over potential problems and over the chance of plants escaping into wildlands. However, in Wildly Successful Plants, I don't skip these hard parts, but have delved into them thoroughly so that a gardener can make decisions that are responsible for our region and for an individual garden.

One of the main principles of responsibility is that plants act differently in different regions. I was surprised to find lady's mantle (Alchimella mollis) listed in Cultivating Chaos as a self-seeder, as it has never done that in my garden. Nor has blanket flower (Gaillardia). On the other hand, they say that Mexican daisy (Erigeron karvinskianus) can be expected to self-sow only in dry locations with sandy soil. Here, in a dry summer Mediterranean climate, that plant reproduces like crazy (though the variety 'Spindrift', mentioned in Wildly Successful Plants, is said not to produce seed.)

There is also a question of whether a plant could become a wildland weed. Again, only a paragraph of warning in Cultivating Chaos, but a careful analysis in Wildly Successful Plants. My analysis is possible in part because I am writing about a specific region, whereas Cultivating Chaos, which was written by Germans and which tries to be more universal in coverage, can't deal with the fact that fennel and ox-eye daisy, which they recommend, are nasty weeds here, while lady's mantle, as I mentioned, doesn’t seem to self sow at all. 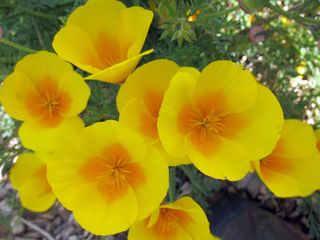 To be a wildland weed, incidentally, a plant needs not only to self-sow, but to be able to compete in regional undisturbed or lightly disturbed wildland habitats. This ability varies by plant and by region, and I've analyzed it carefully before suggesting each plant in Wildly Successful Plants.

The strength of the book Cultivating Chaos lies not in its analysis of using self-sowing plants responsibly, but in its photos. They give design ideas that will inspire you to want a bit of chaos in your garden. There are all-the-same-color flower plantings and ones with bold contrasting color schemes; informal gardens with only paths through the self-sown beds; and gardens in which chaos plays against formal hedges and hardscape. There are self-sowers peeking up through pavers and ornamenting dry-stone walls. There are photos of plants that have formed handsome seedpods, backlit to show their edges. The photos make me want to create ever more lovely self-seeded chaos in my garden. 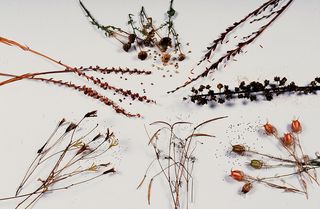 (Seedpods of some common self-seeding flowers.)