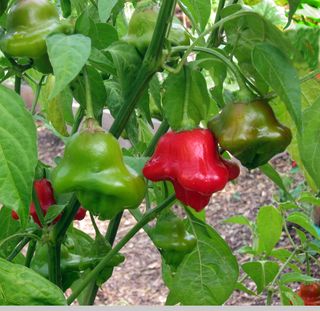 This week's Chronicle column, the one that ran on February 6, 2016, introduced Peridot peppers, a different species of peppers than the common garden peppers. Most of our peppers are Capsicum annuum, but Peridot peppers are Capsicum baccatum. These are South American peppers, and some of them are from higher elevations, in the Andes. At these elevations, the day and night-time temperatures are lower, so the plants are better adapted to our region's cooler summer temperatures. Peppers in this species range from mild to very hot, and share a flavor that is called "fruity, almost citrusy."

A famous Capsicum baccatum variety is the Aji Amarillo. a very hot pepper that matures to an orange color. Annie's Annuals offers plants of this variety. It is traditionally used in ceviche, a raw fish salad.

Peridot is not so hot, in fact it is quite mild if you remove the seeds and internal white ribs. Though I use hot peppers, I was delighted to be able to grow a mild one in SF. I enjoyed the flavor they added to a mixed salad and also used them in a Southwestern corn salad.

The fruits of Peridot are of an interesting shape, oval, but with several wide wings that make the pepper wider than long. The plants reach four feet tall, are V-shaped, or flaring, with 30 to 50 peppers per plant. They set late and ripen into fall. Because the plant is so large, it would be stunted by all but a very large pot, say 18" deep. My plant has survived into February, but does not look as though it will be able to recover and bear fruit a second year. That is, unlike Rocata pepper, Capsicum pubescens, I don't think it will be perennial here. 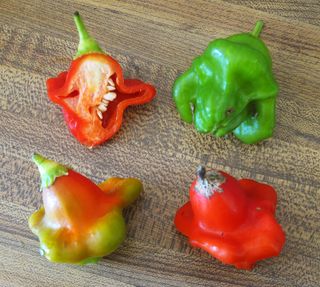 Annie's Annuals should have plenty of Peridot pepper plants this spring (2016). They sell at their nursery as well as by mail order from anniesannuals.com.

I didn't locate any commercial seed source for Perido peppers. I found seed for two varieties that are C. baccatum, and have similar-looking fruit, but both are probably hotter and they seem to grow on plants with different habits than Peridot. The seed I found was for Christmas Bell Hot Pepper, from Reimer Seeds (they say the plants grow to 20 inches tall) and Brazilian Starfish, from Baker Creek Seeds (said to grow on a weeping, almost vine-like plant).