A New Protector Against Burrowing Animals

This spring I found that a burrowing animal was eating plants, roots and tops, in my small front garden. I know it was not a mole, because moles don't eat plants, just insects and earthworms. Could have been a gopher, but by the amount it ate in a night, I thought maybe something smaller, maybe a RAT! (The rats that burrow are called sewer rats; the ones that don't, roof rats. Rats have burrowed in my backyard before so this seemed a good guess.)

Whatever it was, my Chinese forget-me-nots, the ones I grew lovingly from seed and transplanted into the garden, were disappearing night by night. Then whatever it was started in on the primroses I just bought and set out, and the large 'Moonglow' yellow yarrow was losing branches, then roots. Then it ate most of the tops off of two x kellereri yarrows!  These were divisions of my original plant-which is one of my favorites. Something had to happen.

I dug out all of the yarrow, both 'Moonglow' and  Kellereri, and what was left of the primroses and put them all in pots on the back porch. Then I cleared away and found the place the varmint had blocked up the opening of its burrow. I dug it out, exposing the hole. The varmint had replugged it the next morning. I repeated. It repeated. I repeated. After many repeats, over several days, I decided I had to escalate. I have heard that water down the burrow can discourage a burrowing pest, but doubted it in a large garden, but in my 10 x 12 foot front garden, maybe it would work. I wanted to tell the varmint that this was not a good place for a home, before it ate everything left there. At this point about a quarter of the tiny space was a wreck. My husband was beginning to ask whether maybe I should be looking for a trap. I said hold on, let's see if this works.

So, the next day, I dug the plug out again, got the hose, attached a jet nozzle, and put it down the hole. Turned on the water. Most of it stayed in the hole. But the next say, the plug was back.

Over the course of a week or so, I dug out the burrow plug 8 or 10 times, used the hose 3 times. And then the varmint stopped replugging the hole.

During the battle, I decided to replant a couple of plants in gopher baskets. And here is where my problem led to a discovery that will be useful to other gardeners. When I went over to San Francisco's Flowercraft nursery, they offered me a new kind of basket, made of a soft stainless steel wire mesh. So this is what I have used, and have written about it in my May 8th, 2016 SF Chronicle column.They are called Grow Master Baskets. To learn more about them and see who sells them, see westernplantingsolutions.com or call 530-751-3366.

These baskets are less expensive than the old kind, easier to handle, and come in many sizes.  The company suggests fitting a basket over the rootball like a glove, but I have used baskets that are a bit larger than present rootballs, spreading the baskets in a wider planting hole, and putting some soil in them, then setting the plants in the soil.That way the plant has room to grow more roots and still be protected. 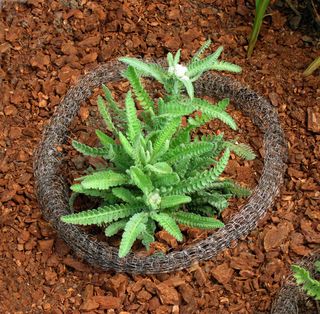 When I first used the basket, the varmint was still active. Because I had used a somewhat larger basket than the rootball, there was enough of it to roll up over the plant and secure with some plant-tie that I ran through some of the openings in the mesh. This protected the top of the plant as well as the roots while it got re-established, and while I figured out what to do next.

But now I have uncovered all of the protected plants. The 'Moonglow' yarrow is about to bloom. The x kellereri yarrows are still recovering in pots, but they shall return. And one Chinese forget-me-not survived to bloom beautifully!

Voles are eating up plants and burrowing in my neighborhood in Benicia.