A Shout Out for Nichols Garden Nursery Seed Company

When I first arrived in San Francisco, many years ago, living in a rented flat, wanting to plant a few vegetables in a neighbor's yard. I discovered the Nichols Garden Nursery herb and rare seed catalog. They had everything I needed to try out my new climate and microclimate. They are still there, still carry old and new favorites, and now, of course, they are also on the web.

Located in Western Oregon, the nursery is experienced with cool summers, especially with cool summer nights. In their catalog I discovered many varieties that were to become staples over the years. They had purple-podded bush beans, which are your best bet to grow regular garden beans in near-coastal microclimates because they germinate well in cold soil. If those worked in a particular location, then I tried 'Roma II', a bush romano bean, the kind with broad, flat pods and a buttery texture. If the garden was too chilly for the purple bush beans, then I knew I had better plant Scarlet Runner beans, because they are, as the Nichols catalog states, "an excellent cool weather variety." If I had great success with the Roma II beans, it was time to try some regular pole beans, like 'Goldmarie', a yellow-podded pole romano or old standby 'Kentucky Wonder Pole'. 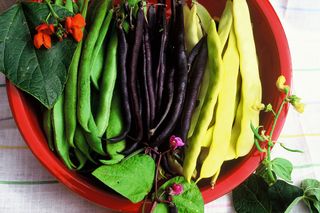 Nichols still carries all of these bean varieties, all open pollinated, all heirlooms, and many more. And they still carry 'Early Sunglow' corn, a variety listed at 62 days to maturity. It succeeds in milder San Francisco neighborhoods, taking 90 days due to the cool microclimate, but still allowing two plantings a summer--one in May and another in July. That second planting comes out in mid-October, right before the usuals start of the rainy season. The stalks are short, but bear 2 ears. The ears are smaller than supermarket corn, but worth it for the chance to eat fresh, fresh, corn-on-the-cob.

They also still carry overwintering cole crops like 'Purple Sprouting' broccoli, the beautiful and the delicious 'January King' cabbage. And many kinds of kale, including two packets of kale mixes that let you see the wonderful diversity of this nutritious leafy green.

It was also the place I first found 'Stupice' tomatoes, early and tasty in cool summers. They carry 'Early Girl', 'Green Zebra', and 'Oregon Spring', all of which have borne fruit well in my Mission District community garden. And they have kept up with the times, now the sweet golden cherries 'Sungold', and offering late blight resistant 'Jasper' cherry and larger-fruited 'Mountain Magic'.

There are many other choice varieties in this catalog that I discovered since I first saw it. They have sweet, orange cherry tomato 'Sungold', reliable and early 'Snow Crown' cauliflower, the choice color-mix 'Bright Lights' chard, striped and ribbed heirloom zucchini 'Costata Romanesco', red-splashed and long-bearing 'Flashy Butter Oak' lettuce, and 'Bull's Blood' beets, the red leaves of which seem not to interest leafminers in my garden. 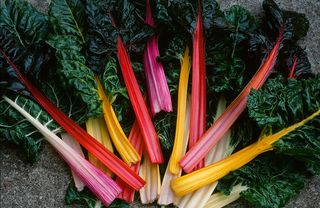 They have also kept up with the issues of the day when it comes to garden seeds. They signed the Safe Seed Pledge, which promises they will not carry seed that is transgenic or genetically engineered. They have also joined the brand new Open Source Seed movement, offering many of the varieties that are pledged never to be patented, keeping seed these open-pollinated varieties available for seedsaving and further selection by gardeners and farmers.

The first page that attracted me to Nichols was the "New and Unusual Vegetables" page. Here I found the uncommon crop, the surprises, unusual varieties and little-known crops. Many unusual crops are also in the rest of the catalog. They have 5 varieties of hops roots, 4 kinds of potato starts, walking onion bulbs, seed for the exquisitely flavored herb, Shiso, 'Lemon Gem' edible marigold, 3 varieties of Quinoa, miner's lettuce, magenta-leaved orach, and Tromboncino climbing summer squash. 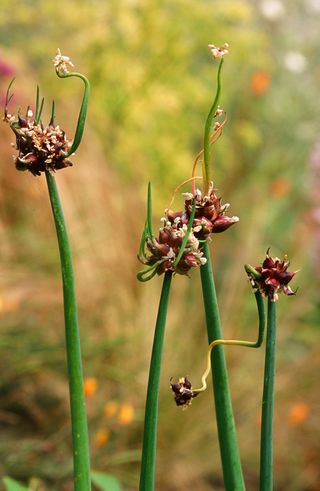 Walking Onion is a scallion (green onion) that propagates by stem-top bulblets.

I have only ordered seed from Nichols Garden Nursery, but they sell many other products, from essential herb oils, herbal teas, and 2 kinds of sourdough starters to ingredients and equipment for making beer cheese and wine.

Nichols Garden Nursery is a family-owned business founded in 1950 by Nick and Edith Nichols and run currently by their daughter Rose Marie Nchols McGee. They are located at 1190  Old Salem Road, in Albany, Oregon. At their brick and mortar nursery, they sell herb plants and seasonal seedlings, including many specialty plants they don't sell through the mail. You just missed their annual Plant Day, with the traditional serving of Lavendar/Ginger ice cream, but it is the Saturday after Mother's Day, in case you are planning a trip through Oregon next spring.

The website of Nichols Garden Nursery is nicholsgardennursery.com. Pay it a visit and discover a treasure for our west coast gardens.