Peppers Leafing Out After Winter

In the post I wrote about Peridot pepper, I said it was not leafing out again in spring, and that I thought it would not be a perennial plant in San Francisco. But perhaps I spoke too soon.

As background, I should say that even common garden peppers, the ones in the species Capsicum annuum, are perennials in a tropical enough climate. I have overwintered them in San Francisco. They lost their leaves, but did leaf out moderately well and bore a small crop the second summer. They were not as productive as in the first summer, and since in San Francisco, they weren't hugely productive the first year, I decided overwintering them wasn't worth the trouble.

One species pepper is fully perennial here. That is the rocata pepper, in the species Capsicum pubescens. It keeps almost all of its leaves over the winter, and, with moderate pruning of damaged branches, keeps right on going in the spring. The peppers are usually very hot, though some varieties have fruit that is milder when it is green. Plants are  shrubs, up to 6 feet tall in milder parts of SF. 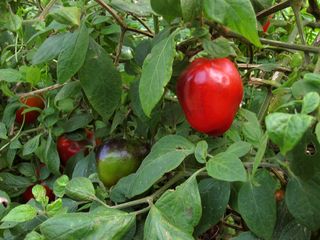 This is what Rocata pepper looks like. It keeps most of its leaves all winter, just needs light pruning in spring.

Peridot peppers are in the species Capsicum baccatum. They grow in the lower elevations of the Andes, where nights are cool, so they can bear a crop in cooler Bay Area sites. And they are a sweet pepper, with only a flash of heat now and then. (See earlier post on Peridot pepper for more photos and details.) 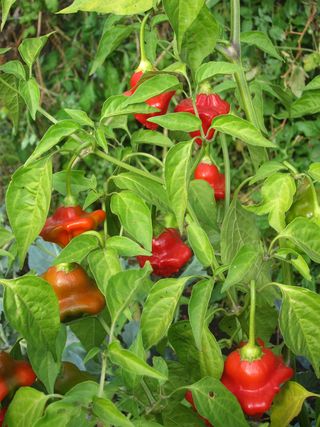 Peridot Peppers bear in September and October then lose most of their leaves in winter.

I also grew a second variety of C. baccatum last year, which had long fruit, similarly mild, that ripened to orange. I thought it might be Aji Amarillo, the hot pepper often used in ceviche in South America, but apparently not. (Aji Amarillo seems to be a shorter pepper, in addition to being fiery hot.) From looking at web descriptions of C. baccatum varieties, I think I grew Peru Long Orange. The fruit reached 7 inches long, the plant was five feet tall, and it bore very late, into November and December. (It was great to have peppers in winter.) 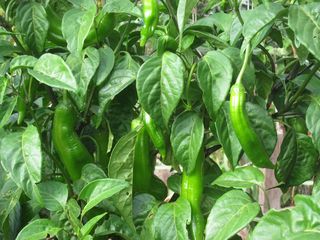 This is the one I call Peru Long Orange, before the fruit turns orange. 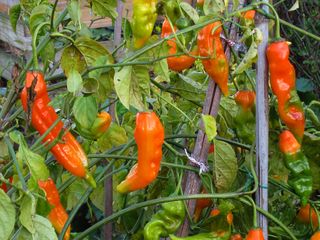 Here is how it looks in winter if you leave it on to ripen. Notice the leaves are becoming yellowish.

So now its spring. I left the plants in, to see what would happen. First, a fine, deep green shoot emerged at the base of the Long Orange plant. Then little shoots appeared here and there on that plant as well as on the Peridot. The best, most vigorous, shoots were often lower on the branches, not at their ends. I began a careful pruning program, cutting branches back just above strong shoots. That is, I was letting the plant leaf out first, to guide me as to where to cut. I also worked some aged manure into the soil near the plants (I had turkey manure.) to give them a boost.

By May the Peru Long Orange plant has become quite leafy, lots of big, dark green leaves. It is a foot or two shorter than it was, due to my pruning, but growing nicely. The Peridot shoots are not quite as vigorous (and I don't have a good photo of it yet). Perhaps the fact that Peridot bears fruit earlier in the season is related to its being slightly less able to recover from winter. However, it is too soon to tell whether either plant will bear a good crop this year. I'll let you know. 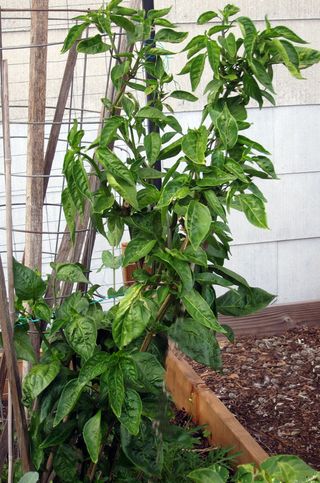 Peru Long Orange leafing out in the second year, shown in late April. 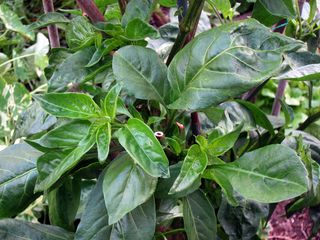 I must say, however, that plants in a friend's garden are not leafing out as well. The Long Orange in that garden was cut back heavily, before it began to grow new leaves, so perhaps this was an error. The Peridot in that garden was allowed to hold onto much of its ripe fruit through the winter, so perhaps it used up too much energy ripening seeds to have much left for regrowing. (I ate most of my Peridot peppers green, finding the flavor nicer than when it was red, and took off the last fruits in about December.)

I have put in new plants of each, next to the old plants, and will be comparing their performance, to try to decide it is worthwhile to overwinter these plants.

Annie's Annuals anniesannuals.com, grew both kinds of C. baccatum this spring, and even offer Aji Amarillo. If anyone grows any of these plants and has new info to impart, please send a comment.