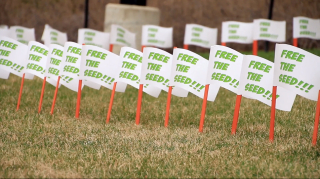 Have you purchased a plant and found that the label says it is illegal to propagate the plant? Illegal to make cuttings, divisions, or to to save seed? Increasingly, when plant varieties are being patented, making it illegal for a customer to get them without purchasing them from a certain company.

A separate issue affecting gardeners who want to save seeds is the increase in the market of F1 hybrid varieties. These are bred to display a certain set of desirable traits in the first generation, but not in subsequent generations. There is no law against saving F1 hybrid seed to grow, but if you do so, the positive traits will break apart in the next generation (the F2), some appearing in some offspring, others in other offspring. A certain number of the plants that grow from the seed won't have any of the positive traits of the first generation.

Older plant varieties, the so-called "heirlooms," are not F1 hybrids. This is because throughout human history, farmers and gardeners didn't know how to breed plants to create those hybrids. They just saved seeds from their best plants from year to year. (Another word for these non-hybrids is open pollinated. So all heirloom seed is open-pollinated.) The heirloom seed movement has been finding these old varieties and selling them through their seed catalogs.

Besides this salvaging of old varieties, certain plant breeders, university researchers or public-minded private individuals, have been breeding new open pollinated varieties with positive traits that rival the hybrids. They may "grow out" a hybrid, saving the best seed from several post-F1 hybrid generations until they obtain seed that will stably reproduce the best traits of that hybrid. Or they may make crosses themselves, transferring pollen of a plant onto the female part of the flower of another, hoping to create offspring with the best traits of both parents.

However, in my research to locate these new varieties, I came across a new initiative that gardeners should know about. This is the Open Source Seed Initiative. Some of the new breeders of open-pollinated varieties are registering them with this initiative. By doing so, they are stating that they will not patent the seed of the variety, nor can it, or other varieties that are bred from it to be patented. Here is their logo: 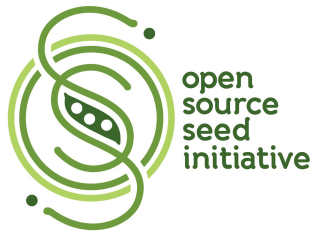 You will start to see this logo in seed catalogs. If you are viewing a catalog online, you will often have the option of sorting the offerings to just show the ones registered with the Open Source Seed Initiative. You can also read more about the organization that registers the varieties at osseeds.org.

One of my favorite varieties covered by the initiative is 'Flashy Butter Oak' lettuce. It is a looseleaf lettuce with broad, oakleaf-type leaves, speckled with maroon. I find it to be sweet and nonbitter even when it is mature and about to form seed, and that it grows well in cold or warmer weather. (I garden in San Francisco, so my definition of warm is not what it would be inland.) 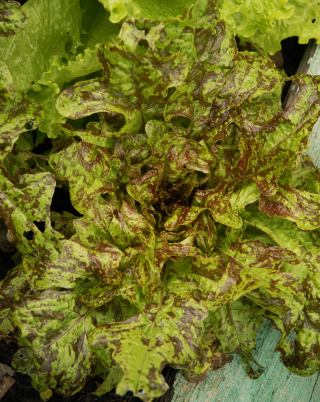 This lettuce was selected or bred by Frank Morton of Lupine Knoll Farm at Grant's Pass Oregon. At my last reading of catalogs, you could buy seed at Bountiful Gardens (bountifulgardens.com), Territorial Seed Company (territorialseeds.com), or Wild Garden Seed Company (wildgardenseed.com). (I have also been saving seed to donate to the Seed Library at the Potrero Branch of the San Francisco Public Library, but they will not always have it, as my donations may not be large enough to meet the need.)

Frank Morton has released several other nice open-pollinated varieties, several of which are under the Open Source Seed Initiative, and you will see his name listed next to his  varieties in seed catalogs. So that you can have a face to associate with these varieties, I offer his photo, collecting lettuce seed. Thanks Frank!