Spring Bloom in Fall--It's a Problem

In today's SF Chronicle (January 1, 1917), I wrote about plants that bloomed last fall in San Francisco that ought not to have been blooming until spring, caused by continuing climate change.

While it's true that we typically have our warmest "summer" weather from mid-September to mid-October, this weather has been lasting longer than usual. Last fall, the warm days and mild nights lasted until near the end of November. We celebrated time spent outdoors in nice weather, but some of our garden plants reacted by blooming and leafing out as if it were spring. This is a problem for the plants, which put energy and physical matter into doing this, so that when spring really does come, they have less stored matter and food energy to do it all again. This weakens the plant, leaving it more susceptible to all kinds of setbacks.

Case in point is my apple tree, which has borne bountiful crops of delicious apples for 30 years. But recently it has been trying to bloom in fall. Then, because winters aren't quite cold enough, it blooms later than usual in the spring. And, because of the energy it used up in fall, it blooms more sparsely. Two years ago, it had practically no fruit.

Last year it did better, though not as well as it used to do. The photo below, which I sent to the Chronicle, but they didn't use in the paper, shows my tree last November, with a few last apples and last leaves till hanging on while blooms and new leaves opened all around them. Now, on January 1, all the new leaves have succumbed to cold, wasting all that effort. 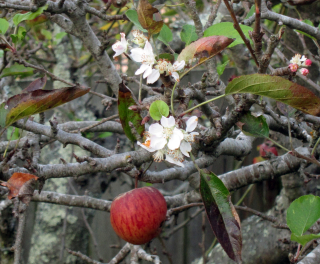 If you are growing other temperate plants in the Bay Area, such as cherries and plums (ornamental or fruiting), magnolias, lilacs, or azaleas, you may be having the same kind of problem. What's to be done to save our plants? Obviously continue to work against climate change, a movement in which California in general is doing well.  But we can also join an effort to record the changes, in which our regional data will provide extremely valuable evidence.

More data about how climate change is affecting plants in our region is especially important so that we are represented in a system that has so much more data from cold-winter regions.

There are two organizations that are seeking citizen science data. One is the National Phenology Network (www.usapn.org/), sponsor of the National Phenology Project. It studies both plant and animal species. Another, Project Budburst (budburst.org), is studying only plant responses. Phenology is the study of what plants and animals do in response to seasonal changes.

Sending records to these databases is easy to do online. Log in, choose a plant, and tell them what it is doing on various dates. Children can do it at home and school classes can do it. Both web sites have curriculum information to help teachers fit the work into classes. It teaches observation, appreciation of plants, climate science, ecology, and how science is done

So as our new, and rather unnerving, year begins, please help observe and record what is going on with nature. Your reports will be powerful.