In my SF Chronicle Column for November, I reported on a weed that has been sighted in San Francisco. It's a native in the  Eastern part of the U.S., so I was surprised to find it here, but there it is. I also saw one down the Peninsula this summer, though I forget just where.

The plant is large, 4-10 feet tall, and most parts and stages of it are toxic to most mammals. I described it in my column, but was unable to get a photo of it into the print version. However, I can show a photo here. This is an image of a stem of berries. Botanists call this kind of flower or fruit-bearing stem a raceme. The berries are dark purple. When they are ripe, their stems and the longer central stem of the raceme are usually bright pink. The stems of ripe berries are the most recognizable parts of the plant. 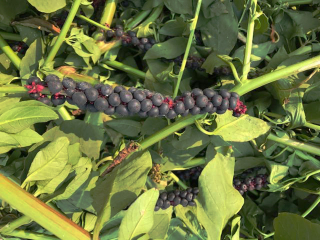 You may find it surprising, given the toxicity of this plant, to know that it has long been a part of the diet of rural people in the South and eastern-central parts of the U.S.one of the young greens gathered and eaten in spring.  Only the leaves of very young plants are eaten, and they must be boiled two or three times, with the boiling water drained off of them between boilings and after the last one. This dish is called "poke sallet." (It important to know that the word "sallet" derives from an old English word that meant cooked greens, not salad, as the raw leaves would be toxic.)

The berries are toxic, and eating only a few has killed small children. Though some say the seeds are the most toxic part, it hardly seems worth the risk to try them. Birds seem immune to the berry toxin, so the fruit is eaten by many kinds of birds, including Northern mockingbird, mourning doves, and cedar waxwings. Raccoons and possums may also be able to eat the berries, though most mammals cannot.

The most toxic part of all is the root. The plant is perennial, likely to regrow from last year's roots, so the best way to get rid of it is to dig it out. Wear gloves, as the toxin can enter through skin. Then pick up any fallen berries you see, and watch for seedlings. (The young plants are sort of nondescript, with large oval, pointed leaves.)

How did the weed get here? Presumably from bird-planted seed, but it's possible the seed was assisted by some other form of transportation. It could have stowed away in tire treads or shoe treads. While there are domestic varieties, are grown as ornamentals, their leaves look different from the wild plant. (The ornamental varieties are  ‘Silberstein’, which has pale, cream-colored leaves with green spots, and ‘Sunny Side Up’, with yellow-green leaves.) The ones being found in the Bay Area seem to have normally green leaves, meaning are not escaped ornamentals.

Phytolacca Americana was probably brought by families during the "Okie Migration" of the 1930's. That's likely why California was a big (biggest?) importer of commercially canned poke greens (from two companies; Allen's being one). Being born Los Angeles and raised in Ventura all I had was the canned. I never saw the plant but was warned about eating it raw by my parents. Canned poke greens was stocked by Ralphs, Vons and Alpha-Beta.
Not just leaves from young plants but the young leaves from old plants are fine greens to process. In the South, some people eat the first spring shoots too but I've never tried.

I’m in Emerald Hills and for the first time in nearly 5 years here I have this plant growing in my yard.

Pokeweed is a minor weed of wildlands. Birds eat the berries and distribute them in new places. It's on the
CalIPC.org (California Invasive Plant Council) list of plants that are at least somewhat problematic. It seems that birds eating pokeweed berries can carry the seeds into wild areas, but it is mostly a roadside weed there rather than one that has taken over native plant areas undisturbed by humans,. (Check out the CalIPC list.)

I have some of this coming up in my backyard in the Mission as a volunteer. This year is the first time I've seen it here, although I'm familiar with it from growing up in the midwest. It poses little risk to anyone growing where it is, so I may let it go for a while, unless it's truly an invasive nightmare waiting to happen?

Hello, I live in San Francisco and have a poke sallet plant growing in my back yard. I believe through my research that there are many rural legends regarding this plant. Yes, it is toxic if not handled correctly, like so many other plants! Consider the poinsettia.
I love this beautiful plant, that begs to be pruned!