How to "Know Your Onions"

Old farmers would say of a farmer they admired: “He knows his onions.”

Old farmers are few and far between these days, as is any urban gardener who knows his/her/their onions. In addition to the basic knowledge needed, producing globe onions (also called bulb onions) in California Bay Area gardens is complicated by our many microclimates. But with a little planning, we can harvest the big, sweet and pungent globe onions that we see in grocery stores.

Before you start, there are two factors to understand: The first is why you shouldn’t plant too early. Onions should be planted in fall or winter. But if by December, the stem of an onion plant is thicker than a pencil, the plant is likely to flower in the spring, and thus form no bulb. (In fact, it won’t form much that is edible, and then will produce seed and die. Not what you had in mind!)

The second factor is that onion plants start to form bulbs in response to the day’s length. At our latitude, even the longest day, June 21, is not long enough to stimulate a long-day variety to form bulbs, so avoid planting them. Short-day varieties start forming bulbs as early as the third week of January. Chances are the plants will be so small when they get the “bulbing signal” that the resulting bulb will be rather small.

So what are we to do? The key is to look for varieties labeled “intermediate day” or “day neutral” (such as 'Candy' or 'Red Candy Apple'). Then plant seed as early as you can (more on this below) without letting any seedlings grow to have stems thicker than a pencil in your garden in our coldest months, which are December and January. Not every seed source tells the day length adaptation of their onion varieties. If you are not sure, ask the supplier.

In the previous paragraph, I wrote “as early as you can.” That sounds vague, but it is determined by your microclimate and you can learn it quickly by trial and error. If you are inland, the colder winters will slow the growth of onion seedlings, so you may be able to start seeds in the fall and have them still be so small by December that they will form bulbs in the spring rather than bloom. Try September. Near the coast, with a milder winter, the seedlings might grow bigger, so the safest idea is to wait and plant seed at the start of February.

Alternatively, in any microclimate, you can plant out onion sets or transplants. Onion sets are little bulbs that have been forced into dormancy and then are sold in packages at the nursery. (If you buy them in advance, store them at room temperature to avoid providing the cold that would stimulate any that are already thicker than a pencil to bloom.)

You can grow your own transplants, starting seeds a couple of months before you plant them in your garden. If you grow them indoors on a windowsill, they will not get the winter chill they would get outdoors, so when you plant them out, in February, even if they have pencil-thick stems, they should form bulbs instead of blooming.

You can also buy bundles of bare-root seedlings from a nursery (local or mail order) to plant at the right time.

Green onions (scallions) are the same species as globe onions. You can pull any young onion plants to eat as green onions before they form bulbs. Some gardeners sort the sets, then plant the smaller ones to make globe onions and use the larger ones — which might be big enough to cause them to bloom — to grow green onions. (If you know which you plan to harvest as green onions, plant them a bit deeper, for a longer white base.)

While correct variety choice and planting time will take you far toward success, make sure the soil is fertile, keep weeds down (the narrow onion plant has little defense against shading by weeds), water regularly until the bulb is formed and lower stem begins to flatten, then stop watering to reduce the chance of decay. 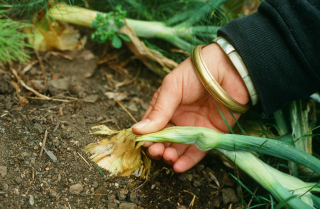 When the stems near the ground allow it, bend the plants over; this will help the plants go dormant, so the onions will last longer in post-harvest storage. When the stem and leaves are all brown, dig the bulbs and keep them in a cool, dry place.

May you “know your onions,” and may they be big, juicy and delicious!