Is There a Seed Shortage?

Recently, as I browsed online seed catalogs, I noticed more varieties than usual listed as “Out of Stock.” In addition, some seed companies are warning that delivery may take longer than usual. Some are even shutting down periodically while they catch up on orders. I’ve wondered: “What’s going on? Is there a seed shortage?” At a National Gardening Bureau-sponsored panel presentation in March, I learned from seed suppliers what challenges they are facing and also their advice for gardeners.

Diane Blazek, Executive Director of the Bureau says that last spring, seed retailers were selling to 100-400% more customers than in previous years, and this year is headed in the same direction. Last year, the greatest sales increase was in vegetable seeds; this year, more people are also buying flower seeds and plants, fruit plants, and bedding plants. 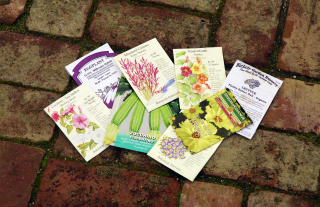 Packaging small amounts of seeds in small packets like these is more time consuming than selling seed in bulk.

The main reason for last year’s increased sales of vegetable seeds was probably insecurity—like the rush to buy toilet paper. Last March, people noticed food shortages at the grocery store and decided to take matters into their own hands. Then also, people were at home more, looking out the window at their gardens and imagining food growing there. (It’s telling that more time at home revived the urge to grow food, along with an inspiration to bake bread. It seems these enthusiasms are running just under the surface, only waiting to be daylighted by having more time to partake in them.)

This year, many people feared that the mails would be slow, what with holidays and so much online shopping taking place, so they sent orders on early, in December and January. Meanwhile, seed companies are having problems filling so many orders while dealing with the pandemic. They have been struggling to keep employees safe—requiring temperature taking, masks, and handwashing; spacing workers farther apart and adding deep cleaning between shifts. Some of these policies slowed the processes of packing seed and filling orders, sometimes requiring work into the evening and weekend, or two shifts a day. If seed companies sought more workers, they found them hard to come by, especially in rural locations. Larger companies have automated filling seed packets, but smaller companies that can’t afford the expensive packaging equipment, are less able to increase seed packet preparation without additional workers.

Add to this that very real Postal Service slowdown, the storm in Texas and the East that caused several FedEx offices to close down temporarily, a shortage of labor to unload container ships at ports, and a shortage of air transport, and you have a bottleneck that starts with wholesalers and then impacts retail customers.

So is there a seed shortage? Seed wholesalers and retailers say mostly there is not. Seed retailers on the panel reported “Out Of Stock” situations for only 83 out of 2,300 varieties (Jung Seeds) and 136 out of 2,000 (Johnny’s Select Seeds). In some cases, the problem is just a lack of time to get the seeds out of cold storage and into seed packets ready to mail. In a very few cases, the seed has not yet arrived from a wholesaler. It could be in one of those ships waiting to be unloaded or could actually be not ready for to harvest. However, because seed production now is a worldwide business, and includes tropical and southern hemisphere locations, seed could be arriving soon to bolster the supply. While few shortages are expected this year, Jeannine Bogard, of Syngentia Seeds, said that seed of biennial crops, such as carrots, could be scarce next year because of this year’s high demand.

Advice to this year’s wise gardener is to order seed well in advance of the date you plan to plant, avoid ordering more than you need or hoarding seed, and to read websites or catalogs carefully to learn how long delivery might take. (Don’t clog communication avenues by calling or emailing before this time has passed.) In addition, you may find, this year and next year, you’ll need to substitute a different variety for one that has been your favorite.

It’s good news there are so many new gardeners, and especially good news so many of them are younger than the previous average age of Americans gardeners that they have lowered that average. There has also been more interest in organically produced seed—which is good news for the earth. Those of us who have been growing food a long time will have much help to offer new gardeners when they need it. Grow on! 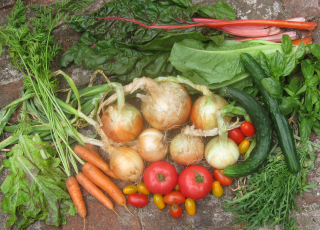 The harvest from my San Francisco community garden on one day in the early summer of 2020.