Home Archives About Pam Peirce Events Subscribe
Is There a Seed Shortage?
My Book Lists on a New Website

In the United States, the crisp, sweet, crunch of yacon roots is a secret known mainly to gardeners. When I began to grow it, late in the last century, it was even less known, though it has been a popular food in its native South America for centuries. 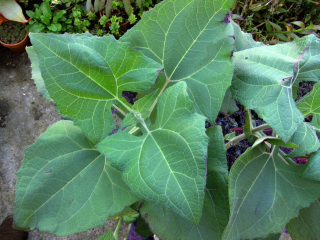 After I read about this plant in the book Lost Crops of the Incas, it took me three years to locate starts to grow. The low point was the first trip I took to a tropical plant nursery near my parents’ house in San Diego County. I had spoken to the proprietor on the phone. He assured me he had the plant for sale if I could pick it up, but when I got to the nursery, employees told me he was on a plant-hunting trip in South America. They were sure there was some yacon somewhere in the nursery, but they had no idea how to identify it, and I, having seen only a written description, didn’t either. So that was that.

I tried again the following year. This time, a nursery worker told me the proprietor was somewhere in the nursery, but who knew where? I wandered amid the dense, tropical foliage lining the labyrinthine nursery paths, until I rounded a blind turn and practically walked into the man who could locate yacon for me!

Yacon is much easier to find now, so now many people enjoy its crisp, juicy roots. They are sort of like jicama, but more tender; sort of like watermelon, but a bit firmer. And their sweetness is from a sugar we don’t digest, so the roots are low in calories. Marketers are even touting yacon syrup as a healthful sweetener, though I’m sure the fresh, raw roots are even better for you, plus you get to enjoy their crunchy and juicy texture.

This exuberantly large perennial plant, with its broad, furry, gray-green leaves, is, botanically, Smallanthus sonchifolius, a relative of sunchoke (Jerusalem artichoke) and sunflower. (In the fall, the small orange daisies that bloom atop the tall plants show the plant family relationship.) Besides yacon, it has been called Bolivian sunroot, Peruvian ground apple, strawberry jicama, and, by teenagers who so enjoyed my harvest, simply “the root.”

In mid- to late fall, when the leaves start to die, you can cut the stem back and dig up the harvest. When you do, the first structures you will see are the rhizomes, which look like Jerusalem artichokes. You will save these to replant for next year. What you eat are storage roots that dangle from the rhizomes. They range in shape, from spindle- to globe-shaped, and from a couple of inches in diameter to 6 or 7 inches across. Under a thin brown skin, they are white inside. (The storage roots are delicate, so dig carefully.) They are said to be sweeter after a frost, or after storage in a refrigerator for a couple of weeks. I often eat roots as soon as I dig, and have found them variable in sweetness, but always worth eating. 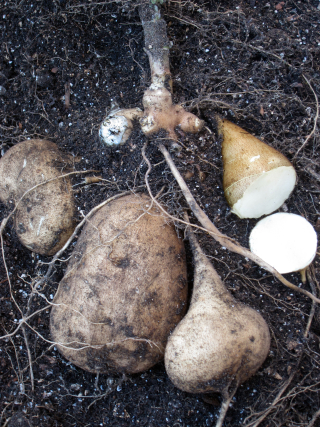 Break or cut the roots from the rhizomes, wash them, peel them with a vegetable peeling tool, wash again, and slice them into pieces. I have found them welcome in lunch boxes and useful in salads. (For example, I have used slices of yacon in place of jicama in a salad that includes blood orange and avocado. The recipe is in Golden Gate Gardening.) They could, I suppose, be cooked, but I have never been inspired to do that.

If you are cutting back several plants, leave a foot or so of the stems, so you will know where to dig later. Divide and replant the rhizomes by late winter, before they start to grow again. A full plant will grow from a small rhizome, so you may have extra to share with friends.

This is an easy plant to grow. Other than an occasional nibbled leaf, mine have not seen pest damage. The plant is so big I thought it wouldn’t do well in a container, but it is so tough and productive that it has even produced a small crop of roots in a big pot. The fact it was in a pot made the roots easier to dig.