An Appreciation of Tigridia--A Summer-Blooming Bulb

In my dry-summer  San Francisco garden, the spring bloom is wonderful, but not as much blooms in summer. So in July and August, when spring's show has faded, I welcome the dramatically large and vivid blossoms of Tigridia pavonia. I like the color they add to my summer garden and the fact that the dramatic flowers face upward, so I see the fronts of the flowers when I look down from an upstairs window or even when I am standing over the flower bed. Each flower lasts only a single day, but each plant has several flowers, so the show goes on for weeks.

Tigridias grow from small bulbs, which are frequently offered in nurseries. They also grow easily from seed, and often bloom the first year from a seed. though it might take two years for a seed-grown plant to bloom. Where winter temperatures do not drop below 30 degrees F, and if soil drainage is good, they are likely to come back year after year. 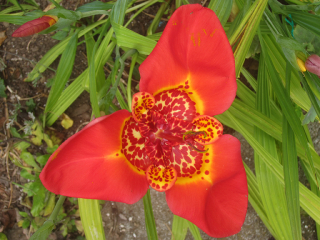 Tigridia flowers are triangular, on stems 1 1/2 to 2 feet tall. They are 3-6 inches across, typically 4 inches or more. They can be red, pink, yellow or white, usually with a contrasting, spotted center. As you might guess from the scientific name, it is sometimes called a "Tiger flower," though the typically spotted center looks more like a leopard or jaguar to me. Another common name is Mexican shell flower, reflecting the Mexican origin of the plants, which grows from Mexican lowlands to its higher elevations. 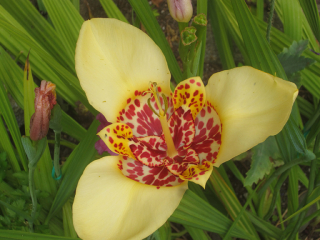 I saved seeds from yellow flowers only and grew an all-yellow planting in my front garden, where I avoid pink flowers, allowing only white, yellow, orange, red, and blue. I grew the seedlings I hoped would have yellow flowers in a container for the first year, and when I saw they were, transplanted them to the front garden. This was a successful experiment, so now I have a yellow selection in front, and another that is blooming in red, pink, or yellow in the back yard.

Here is a close up of the center of the flower, showing the pistil and stamens. The tall pistil has a branched stigma on top. The lower part of the stamens appear to be pressed closely against the lower part of the pistil, with the 3 pollen-bearing anthers near the stigma. I have not seen what pollinates Tigridia, but clearly some insect does so, aiming for that dramatically spotted center. The plants bear many seeds, in a long pod. When the pod turns brown and the top opens, one can cut the pods and simply shake them upside down to let the seeds fall out. 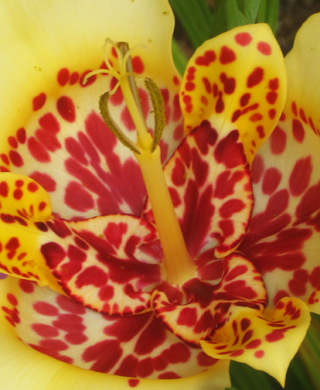 The Pacific Bulb Society says that the exact origin of this plant are unclear because the Aztecs ate the bulbs, so they moved it around by cultivating it. (It is unusual for a member of the Iris family, the Iridaceae, to be edible, so I will not try to eat it until I learn more.) After it blooms, and I have cut any seedheads that I want to save, I will cut the stems low to the ground and let the bulbs remain dormant all winter.

This is not a mediterranean plant, but, like Mexican hen and chicks (Escheveria) it is from a location that has summer rain, but is dry in winter. Still, like that plant, it can adapt to our gardens if it is given some water in our dry season and is growing in soil that drains well, like my San Francisco sandy loam. I don't water the plants after they bloom and they will become dormant over winter.

In spring, the new leaves will emerge, pleated fans that look like palm seedlings. The plants are not very leafy, saving their energy for those dramatic flowers. If I have seed, I will sow it in late winter, indoors, probably on my little heat mat. I may grow the plants in containers for the first year or just plant them out in the garden and see what happens.