Recently we attended a Dickens Dinner Party, sponsored by the Bay Area Culinary Historians (BACH). We were asked to make a dish for the dinner from a recipe that was in a cookbook of the era. I chose to make an apple tart, using apples from our tree. The following photos are from the making of my "test tart," the one I made in November, just to see how it would turn out. To see photos from the actual dinner, see the Facebook page of BACH, though for some reason they didn't catch an image of the two tarts I brought to the dinner.

A tart is like a pie, but the crust often contains a little sugar, maybe some egg, and the tart is much flatter than a pie. You can make a "rustic tart" on a cookie sheet, by just flipping the edges of the crust over the filling all around, but a classic tart is made in a tart pan, which has a removable bottom. This way you can have a nice fluted crust. You can leave the tart on removable bottom after removing the ring that produces the fluted edge. I used 10" tart pans. 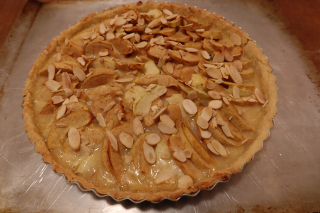 For making a Tart there were several crust, or “paste” recipes. I used the one titled “Another Good Short Crust” For the tart filling, she used the recipe for “Apple Tourte or Cake.” Recipes as they appeared in the cookbook follow, first for the crust, then for the filling, with my notes after each.

Mode.—Rub the butter into the flour, add the sugar, and mix the whole as lightly as possible to a smooth paste, with the yolks of eggs well beaten, and the milk. The proportion of the latter ingredient must be judged of by the size of the eggs: if these are large, so much will not be required, and more if the eggs are smaller.

To make a single tart of this crust, try:

Yolk of one egg

Notes: After spending some time looking for an equivalent between cups and pounds of flour, and finding that there is not an exact equivalent, I weighed the flour on a kitchen scale.

When I had added all the ingredients called for, I  found I needed to add a small amount of cold water, in tiny increments, to get the dough to form a ball and clean the bowl—being careful not to “work” the dough, which would develop the gluten, making the crust tough.

I would ordinarily make a pie or tart crust using Smart Balance margarine—better for you than butter. 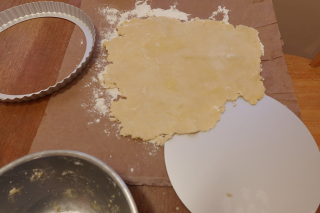 I open a grocery bag into a large sheet of brown paper and cut it in half to use for crust-rolling surfaces two different baking events. In the above photo, I have rolled the dough and am inserting the flat bottom of the tart pan under the dough. I will slide it from several angles to free the dough from the floured paper, then center it under the dough, which I have rolled large enough to go up the edges of the pan all around. Then I will set the bottom into the ring and carefully set the extra dough into the ring. 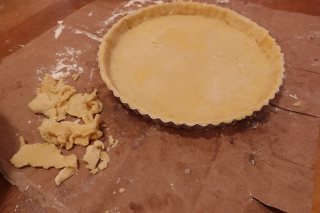 In the above photo, I have set the bottom into the rim and trimmed the extra crust by hand, to the level of the top of the ring. If you look closely, you will see s few patches in the crust, where I added a bit of dough to mend tears. If it doesn't stick, I have added a drop of water to moisten the place it has to attach, then pressed it in gently.

Mode.—Pare, core, and cut the apples into small pieces; put sufficient moist sugar to sweeten them into a basin; add the lemon-peel, which should be finely minced, and the cream; stir these ingredients well, whisk the eggs, and melt the butter; mix altogether, add the sliced apple, and let these be well stirred into the mixture. Line a large round plate with the paste, place a narrow rim of the same round the outer edge, and lay the apples thickly in the middle. Blanch the almonds, cut them into long shreds, and strew over the top of the apples, and bake from 1⁄2 to 3⁄4 hour, taking care that the almonds do not get burnt: when done, strew some sifted sugar over the top, and serve. This tourte may be eaten either hot or cold, and is sufficient to fill 2 large- sized plates.

I divided the recipe in half to produce filling for one tart:

5-6 cored and peeled apples in slices (these were medium-sized, not very large, fruits.)

Sufficient sugar to sweeten—see above (I used about ½ cup per tart--for 5-6 apples.)

Zest of ½ small lemon (I zested a lemon that was grown, without sprays, on our backyard tree)

1 ½ beaten eggs (3/8 cup of egg—approximately, if you want to use egg substitute)

slivered almonds—I used the ones from Trader Joe’s

Notes: I used homegrown apples that were sweet with no tartness, hence I used the lower amount of sugar suggested for an apple pie by the Joy of Cooking book recipe. Our apples are of an unknown variety, but may be Baldwin, which is an American variety that was first grown in 1699. While the recipe is British, if these apples are Baldwins, at least they'd be appropriate to an earlier era.

I used real eggs for the tarts I brought to the dinner, but egg substitute for the single tart I made as a test, which was easier since I could easily measure a “half egg.” It didn’t seem to make a difference which I used. 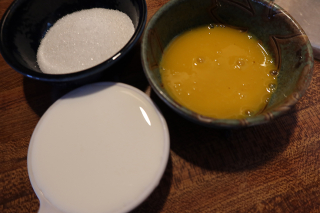 The milk, egg, and sugar make a custard that you pour over the apples. The melted butter is not pictured here. I mixed the custard ingredients and then poured them over the apple slices and mixed them in. 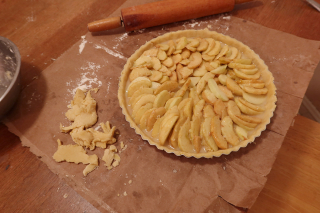 Then I arranged the apple slices in the crust and poured the rest of the custard recipe over them.

There is no oven temperature in these recipes, in keeping with the fact that the cook was probably using an oven fueled by wood or coal. I set my gas oven for 375° I baked the test tart for 45 minutes, and thought it was sufficient, but perhaps a bit longer would have been better. I determined to bake the  tarts for the party for an hour. After I had prepared the party tarts, I was short on time, so I set the oven for 380°. I baked the tarts for an hour and they were done, but had I baked them at 375° they might have needed a bit longer.

The recipe called for just cutting the apples up small. I sliced them into thin wedges and arranged the slices  in whorls, hoping for a more attractive tart, but the combination of the custard in which they are set and the addition of slivered almonds somewhat masked the design, so they could probably have just been cut small and spread without such care with satisfactory results.

I didn’t strew any sugar over the top when it was baked. It didn’t seem to need it.

The following link is to a half-hour video on making an apple custard tart—it is very helpful to watch someone actually make a tart. Two important tips I got from the video are:

I found it particularly helpful to watch these two techniques being done.

In an earlier photos, I have shown how I slipped the tart pan bottom under the crust. The following photo shows how to get the ring off of the bottom. I used a small bowl. At the party, I was provided with a small straight-sided crock. 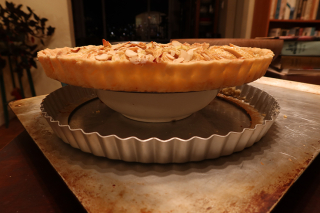 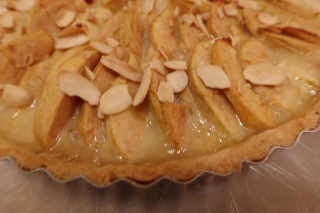 When I was finished making the two tarts for the party, I had some crust dough and apples left over. I made a 7” “rustic tart” in a pie pan, folding the edges of the crust over the apples, clafouti-style. It had less of the custard liquid in it, since I had poured most of that into the tarts, but the apples were coated with some of the custard, and the results were tasty all the same.

Modern cookbooks are more likely to give recipes for “tartlets,” small individual tarts. There are even very small false bottom tart pans made for this purpose, or they can be made in muffin tins, or on a flat pan, simply with pinched corners to keep the filling in. I rather liked making larger tarts, which were beautiful, and which result in less crust per slice and more fruit filling.